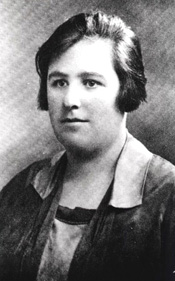 As ever my thought processes can flit from one thing to another. In response to a comment left by a regular and well liked visitor to this blog I mentioned that the last witchcraft trial took place in 1944. This is no joke, but needless to say nobody got burned for their troubles: in England witches were hanged rather than burned when the death penalty was in place.

Helen Duncan has gone down in history as the last person in Britain to be tried as a “witch”. Born in Callender, Scotland in 1897 Duncan displayed an early gift as a medium, apparently being able to make spirits of the dead appear and talk to their relatives. This gift is of course in doubt: in1934 she was found guilty of fake mediumship in Scotland after a sitter at one of her séances made a grab at one of her materialisations and found it to be an under vest!

By WWII Duncan lived in Portsmouth. She attracted attention in December 1941 when she “summoned” the spirit of a sailor who had died when the Battleship HMS Barham. The Barham had been sunk by a German U boat the previous month but the news had not been released at the time of Duncan’s séance.

Duncan remained under surveillance until January 1944, when one of her séances was broken up by police (allegedly because authorities feared she may reveal details of the D Day landings). Initially charged with vagrancy, a crime that attracted a maximum fine of five shillings (25 pence), she was refused bail and was taken to London to face more serious charges. prosecutors charged her with violating the 1735 Witchcraft Act. (Note: the witchcraft Act of 1735 did not provide for the death penalty, rather it allowed fraudulent mediums to be punished as a vagrant or a con artist and fined or imprisoned accordingly).

Duncan’s trial at the Old Bailey court in March 1944 lasted a week and, given the unusual nature of the charge, attracted significant press coverage. She was ultimately found guilty of conspiracy to violate the Witchcraft Act and was sentenced to nine months imprisonment.

The conviction did not please everyone. Winston Churchill wrote to the Home Secretary to complain about the resources wasted on what he described as “absolute tomfoolery to the detriment of the necessary work of the court.” When he was returned to power in 1951 his government repealed the Witchcraft Act, replacing it with the Fraudulent Mediums Act.

The Barham Conspiracy by Jason Stevenson

She is probably a heroine to Mrs Blair.

ah, the A-mazing Randi. Although I am a big fan of teh Fortean Times and fascinated by the unexplained I remain very much a sceptic (not a skeptic.. I am not american after all!).

Jams, you must be an AmeriKKKan in disguise. Period.

No, it is United Thiefdom. learn how to spell, KKKapitalist pig!

scotlands history is charged with this shite,......it's one of the reasons why i don't go in for this 'save the gaelic language' shit.

I've been told Mullet! I quite like these sort of stories.. she was a charlatan but to imprison her smacked of paranoia in my view

One 16th-century religious figure, Michael Servetus, whom we UU's claim as one of our own (whether he would have felt the same is debatable), was burned at the stake in Geneva in 1553 in the era of John Calvin, who was reportedly really sorry he had to do it, but you know how it is, you can't let people get away with saying those things, etc. etc.

Servetus wasn't accused of witchcraft; he merely denied that the deity was a trinity. To this day, when American UU's see fundamentalists gathering firewood (metaphorical for now, but who knows about later), we get very, very nervous.

Besides, a serious purge of witches, UU's, pagans etc. would be really bad for global warming...

I have heard of Servetus but I must admit my knowledge of religious histroy is that great.

I uterly despise the intolerance of faiths to each other or at least the intolerance of some adherents. At work I like it that I can see close to me. Several devout christians, a Jew a couple of Hindus. a Buddhist a Sikh a hew a couple of Muslims and a fair few agnostics and atheists. I know that such a thing is played out in workplaces across the world but if we all can work together in a friendly manner. If we can do it there then why not elsewhere?

Ah given the danger to teh environment I think heretics will have to be stoned in future!

i despise the intolerance too....from everywhere.....agnosticism gets a bad name for 'sitting on the fence', but i think it's the safest bet!

I would be an atheist but it takes an active commitment and I am too damnned lazy!

we are the not aresd, together!