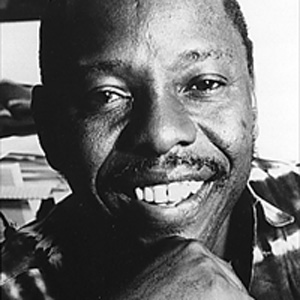 Ken Saro-Wiwa, a Nigerian novelist, journalist and activits who spearheaded a massive campaign against oil corporations and the Nigerian government, accusing both of waging an ecological war against the Ogoni people of the Niger Delta. In 1994, Saro-Wiwa was arrested and accused of incitement to murder. Eighteen months later, following a show trial condemned by human rights organisations, he and eight other leaders of the Movement For the Survival of the Ogoni People were executed by hanging, an act that propelled the story on to the front pages of newspapers worldwide.

Last year, to mark the 10th anniversary of Saro-Wiwa's execution, Platform, together with Amnesty International, the Arts Council and Greenpeace, launched a competition, asking artists to come up with proposals for a Saro-Wiwa memorial. The winner was Nigerian-born sculptor Sokari Douglas Camp, whose "mobile memorial" takes the form of a giant bus, made out of steel and loaded with oil barrels. From tomorrow, it will be parked outside the Guardian's offices in London, before embarking on a UK tour

The idea of a travelling memorial was conceived as an antidote to the notion of fixed, figurative monuments. The memorial is also large enough to serve as a miniature venue for film screenings and exhibitions. For Camp, the image of a rickety vehicle has many resonances - as a pollutant, a carrier of supplies and information, and as a metaphor for Saro-Wiwa's activism."I think transport is an important feature in environmental debate," she says. "The poorer world is always trying to catch up with the west in transporting goods. I wanted a spectacle of some kind, one of those vehicles, stacked precariously with all the goods they can carry. It will be fantastic to see it in a London street."

Camp has strong personal memories of Saro-Wiwa's campaign against the oil companies and its tragic conclusion. "We watched it all fall apart on TV with the rest of the world," she says. "I want people to know just how bad things are in the Delta, and if this structure can educate people that western society uses some areas of the world as dustbins, I think it will help".

The memorial will be unveiled tomorrow and will stay until November 24. The Guardian's Newsroom is also hosting a film and discussion programme to mark the unveiling.

The uneling is part of a day of activities to commemorate Saro Wiwa. I cannot attend the others but I hope to be at the unveiling. If so I will post Photographs

Thanks, jams. I can remember a radio segment on NPR (which has not always stood for "Nice Polite Republicans") on the day Saro-Wiwa was hanged. I can still feel the chill I felt at that moment, and even remember where I was when I heard it. Thanks also for reminding me to renew my Amnesty International membership, which languished on my desk while I was out of work for a long while.

What can one say? It was a disgraceful act by any standards. I am really looking forward to seeing Sokari Douglas Camp's memorial. I should be at the actual unveiling, early morning meetings allowing!

The link between Mind and Social / Environmental-Issues.


Emotion is what we experience during gaps in our thinking.

If there are no gaps there is no emotion.

Today people are thinking all the time and are mistaking thought (words/ language) for emotion.


When society switches-over from physical work (agriculture) to mental work (scientific/ industrial/ financial/ fast visuals/ fast words ) the speed of thinking keeps on accelerating and the gaps between thinking go on decreasing.

There comes a time when there are almost no gaps.

A society that speeds up mentally experiences every mental slowing-down as Depression / Anxiety.

A ( travelling )society that speeds up physically experiences every physical slowing-down as Depression / Anxiety.

A society that entertains itself daily experiences every non-entertaining moment as Depression / Anxiety.

A FAST (LARGE) SOCIETY WILL ALWAYS BE CRUEL TO ANIMALS/ TREES/ AIR/ WATER/ LAND AND TO ITSELF.


To read the complete article please follow either of these links :