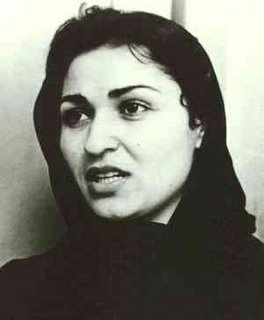 Meena, the founder of RAWA (the Revolutionary Association of the Women of Afghanistan) has been nominated as one of the Heroes of the past 60 years by the Asian edition of Time Magazine. I consider Meena to be an inspirational figure. It is heartening to see her name alongside those of Gandhi, Mother Theresa and Aung Sang Suu Kyi. Her life was cut short at the age of 30, most probably murdered by the KHAD, the Afghan puppets of the KGB.

Meena called the women of Afghanistan sleeping lions, pledging that one day they would awake and roar. In 1977, at the age of 20, she launched the country's first movement for women's rights, calling her group the Revolutionary Association for the Women of Afghanistan (RAWA). Its goals: the restoration of democracy, equality for men and women, social justice, and the separation of religion from the affairs of the state. But in a country mired in tradition and occupied by the Soviet Union, Meena's beliefs were threatening enough to get her assassinated. Ten years after founding RAWA, she was kidnapped and killed; many Afghans held agents of the local communist intelligence agency responsible.

Today, for the first time in Afghan history, women have campaigned for, and won, seats in the national parliament. One of these women is Gulhar Jalal, a childhood friend of Meena's and an illiterate widow who now represents the province of Kunar. "I ran," she says, "because this was Meena's dream."

great post. You should add who assasinated her, and why. Meena is a great saint in my calendar: and if I have saints at all, thank Meena and people like her that I do.

She is an inspiring figure. As well you know I consider her as a real icon of islamic resistance, not scum like the Taliban or Bin Laden. Perhaps western apologists for the islamists should take note of her example.

Achm who am I kidding?

In a world where 'women's rights in Afghanistan' sounds a bit like 'stability in Haiti' or 'gluttony in Ethiopia' (i.e. a perfect oxymoron), she is indeed an inspiring figure. Like a beautiful flower that once bloomed in a arid desert...

Absolutely right there, Sonia. I was pleased to see that Time recognised her as an inspirational figure.

if only our brit girls could see this,jams?

If only mullets.. I wish everyone knew about her