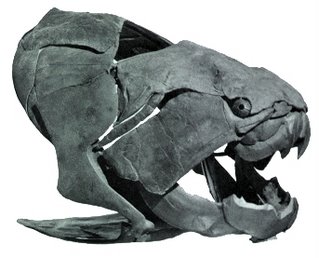 Dunkleosteus skull
The Dunkleosteus, an extinct creature that grew 11m long, weighed up to four tons and armed with a huge array of vicious bladed teeth was already well known to science but the press seems to have been quite taken by a story which indicates that it had a set of jaws which could deliver a terrifyingly strong bite.

Scientists have discovered that the vice-like grip of its jaws enabled Dunkleosteus terrelli to exert a force of over five tonnes on its prey, enough to bite the toughest into two. "Dunkleosteus was able to devour anything in its environment," said Philip Anderson, of the University of Chicago, who led the study published in the Royal Society journal Biology Letters.

A mechanical model of the mouth of the fish revealed that it possessed a highly mobile skull controlled by a unique mechanism based on four rotational joints working in harmony. This gave it the strongest bite of any fish that ever lived and one that rivalled the strongest bites in the animal world, including those of large alligators and the biggest carnivorous dinosaur, Tyrannosaurus rex.

A study of the fossilised skull of the fish also revealed that it could open its jaws in one-fiftieth of a second, creating such a strong suction that it would have quickly pulled prey to its mouth.

The bladed jaw of the D . terrelli enabled the fish to rip apart prey that was bigger than its mouth, a technical feat that sharks did not acquire until 100 million years later.D. terrelli lived during the period known as the Devonian, before the advent of the dinosaurs, and it probably fed on other armour-plated fish, including sharks, as well as tough invertebrates protected by shells and other types of body armour. 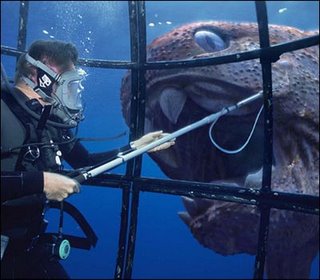 is this thing for real?

Cool. i found this blog by looking to see who else used the tag Dunkleosteus.

It was for real Mullet.. obviously the photo with a diver is a computer artefact!

I linked to this post on my blog here.

That's pretty neat. It just goes to show you there is still a lot left to discover from prehistoric eras. I guess I have some bizzare fascination with dinosaurs and extinct organisms but stuff like this is right up my alley. Thanks for sharing.

Glad you like it Dave.. It was one of those stories that leapt out saying BLOG ME, BLOG ME! so who was I to refuse?