Today’s Guardian reports that Dozens of literary masterpieces and international bestsellers have been banned in Iran in a dramatic rise in censorship that has plunged the country's publishing industry into crisis.

banned
The crackdown also covers classics, such as William Faulkner's As I Lay Dying, and scores of works by Iranian authors, including all works by Sadegh Hedayat, a pre-revolutionary novelist and commentator whose books are renowned in several European countries. His short novel, the Blind Owl is a masterpiece. Some Iranian writers have vowed to withhold future books for publication. 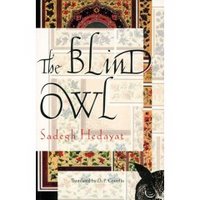 banned
The clampdown has been headed by the hardline culture minister, Mohammed Hossein Saffar Harandi, a former revolutionary guard and close ally of Mr Ahmadinejad. Opening Iran's national book week festival this week, he said a tougher line was needed to stop publishers from serving a "poisoned dish to the young generation". He said some books deliberately gave Iranians a sense of inferiority and encouraged them to be lackeys of the west. "We have complaints against those who see books as only a market and are acting as assistants for evil," he said. "Sometimes the humiliation of Iranian youth is implied or suggested in the books. Sometimes the media transmits the concept that we Muslims and easterners lack proper means and, therefore, we should stretch our hands towards others."

His comments followed the publication of a parliamentary report that attacked Mr Khatami's presidency for creating what it said was a climate encouraging immoral behaviour, sex before marriage, mockery of religious traditions and secularism. One of the report's authors, Javad Aryianmanesh, vice-chairman of the parliamentary culture committeea said: "Due to cultural indulgence necessary supervision over artistic and cultural works did not take place."

The rise in book censorship mirrors repression in other spheres. In September the reformist newspaper Shargh was closed after publishing a cartoon depicting President George Bush, disguised as a horse, debating with a donkey under a halo, widely seen as representing Mr Ahmadinejad. The publishers launched a replacement newspaper, Rouzegar, but it was ordered to close after five days.

Aaah censorship... I have fond memories of its guiding arms, its lovingly stern 'that's not good for you' attitude.
(I grew up under the Nats in South Africa)
Don't kid yourself, it is practiced in the UK and, more overtly, in the US too.

When I first read of the FBI's attempts to investigate people's library checkout records here, I promptly checked out and/or bought a lot of books with, shall we say, active political content, on both the left and the right. I wanted to be sure that when the feds come to my door, my bookshelves are well-stocked with the stuff they're looking for.

Fortunately, librarians here have actively defied that sort of crap, even instituting policies of destroying checkout records soon after the books are checked in. I've known a lot of librarians; many of them are serious civil libertarians. You don't want to mess with librarians!

Well, it seems that Iran is becoming just like Cuba. Maybe the lists of forbidden books are a bit different, but the spirit is the same.

Pisces, I know there is censorship here. However, go to your book store or go to Amazon and order a copy of the Blind Owl. If you can get it as I can get it then we are one up on the people of Iran who are now deprived of one of their greatest novellists.

Perhaps the Vatican will get in the spirit and bring back the Index, Snoopy!

I am glad the librarians did not play ball. What is considered subversive anyway? would you be under surveillance for Dude wheres my country? or the odious Turner Diaries?

It was an idiotic move. I am glad librarians treated it with the contempt it deserved

What exactly is banned in the Uk, Jams? Except Sweet Movie? Do you have a link to a list of banned books, movies etc? (I don't mean banned from a local school, or Kama Sutra banned from a Kindergarten>. I mean books, works of art banned, and a case when owning a copy of them is punishable as such.

Btw you should link Blind Owl to the iranchamber site. The book is avalaibale (for reading) online: (www.iranchamber.com/literature/shedayat/works/blind_owl_01.php)

They successfully banned one fo the most important novels (novellas) of the 20th century. The first modern Iranian novel. So,

Pisces, Iranians wouldn't exactly welcome this stance of yours. Personally, I find it revolting, sorry. Ask any Iranian. I did, not once. And not one.

Could you be more specific, what is the point of comparison here?

The censorship here is of a very low level. I should have made that point clearly

It is largely of the level that Sweet Movie still isn't available here. You might have trouble getting something like the Anarchist cookbook here but it is nothing of the order of Iran or other "free" nations beloved of too many on the left.

Censorship is not just about banning books and movies... it's far more subtle than that. It's about how the news is reported (eg Ask yourself how often street demonstrations are reported openly in the UK).
This is not a 'we're better than you situation' - it is important to be aware that just because it isn't overt, doesn't mean it doesn't happen.
In some ways it is simpler if they openly ban books - at least you know where it is happening; also points out exactly what your government is afraid of [a weakness of sorts I guess] - it's the stuff you don't see or hear that is more worrying.

Ah Pisces so it's better if a government actually bans books? By that absurd logic Iran is far more honest than say the UK or NZ.

I certainly think that the UK press could be a lot more cerebral - I don't give a flying fuck about Cruse, Holmes, Jordan, Andre et al. I think it should deal more with real issues than crass showbiz drivel/ but there is a world of difference from that sort of asinine crap and censorship.


How often are newspapers here in the dishonest UK shut down for opposing the state? How often are journalist thrown into prison for reporting the "wrong" thing? That is a reality for the press in honest nations such as Iran and Cuba.

Now you're just missing my point Jams.
In some ways it is simpler if they openly ban books
Because it is more obvious - doesn't mean it's better or worse.
My point being that just because you can't see it doesn't mean it's not there.
It is more difficult to deal with what you don't know.
For example: South African Newspapers helped turn the tide in the eighties by printing large black shapes where stories had been censored.
Sometimes people need arrows pointing at what is happening right in front of them.

Oh, and just for the record (if it makes you feel any better) I still believe that Britain is one of the best places to live - I will be leaving this shithole of a country (NZ) next year to return to my spiritual home (Scotland):]

I have not doubt the UK government would love to censor the press, what government wouldn't? The D Notice sustem is still in place (rather the DA - Defence Advisory Notice) covering a range of military subjects that can be pulled but it does not stop the press from investigating matters that are very embarrasing to teh government.

If the Government interfered I would hope the press used the South African tactic and printed the blacked shape.

My biggest concern with teh UK press is that it does not do its job very well. Far too much time is spent on when celebrities fart than on proper investigative journalism. That is less the government in action that sheer laziness on the part of the press I think.

DOn't get me wrong I don't think the UK is paradise but I know I am fortunate to have been born here. I can't speak for NZ (never been there) but I get the feeling you don't like the place!

They are different but they are related surely.

A nation without free speech will not have a free press. The Reporters Without Borders annual index on press freedon shows the usual suspects at the top of the tree (Scandanavia, Ireland et al plus the UK not far off) with Cuba Vietnam, and China at the bottom.