As you can see from the header above the title of this blog comes from a Gaelic expression "putting on the poor mouth" which means to exaggerate the direness of one's situation in order to gain time or favour from creditors. It can also simply mean grumbling (which I suppose is apt given the content of this blog...) 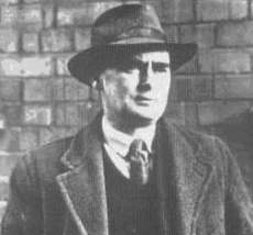 The Poor Mouth is set in the fictional village of Corkadoragha, a place which knows suffering an poverty in spades, It is a place were the torrential rains are more torrential, the squalor more squalid, the hopelessness more utterly hopeless than they are anywhere else in Ireland. 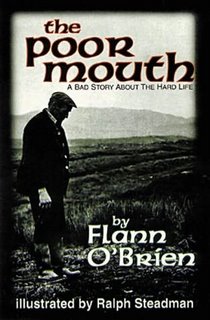 The Dalkey Archive Press edition of the Poor Mouth
It is a wonderful tale in which you learn about being a child of the ashes, Ambrose a pig the size of a house, Sitric O Sanassa (the excellence of his poverty was without comparison in all of Ireland) and the awful Sea Cat a harbinger of misfortune that looks uncannily like the island of Ireland. You also discover the origin of the name Jams O’ Donnell (see my previous post Why Jams O Donnell? ) and why when an Irish person says calls you sir they could be insulting you!

The No Bicycle Page

so now it has a genuine source, this makes you the not poor mouth?

"A postmodernist when it was neither profitable nor popular"

What a brilliant title. How could anyone who had read his newspaper columns resist it?

whatever....just now i'm in benny and the jets

there is a band that called themselves 'jams 'o donnel'
belfast group!

i think we owe it to them jams....a little listen?

Absolutely right Skuds! It's a great title. The Cuiskeen Lawn articles could be wonderful.

I noticed that there was a musician called jamsodonnell, mullet. Definitely must find out what the jamsodonnell sound is like.

I've used the "poor mouth", a few times in my life.

I tend to used the "potty mouth" myself!

i tend to be the foot in the mouth

Looking for a pic of the Sea-Cat, finding none on the Net, but blogging on ye with thanks to the spirit of your titular scribe.

Thanks for the link!