Next week Latvia will host its biggest ever political event when 26 heads of state come to Riga to attend a NATO summit – the first to take place in a former soviet republic. In a move almost certainly intended to inflame tensions ahead of the summit the Russian foreign intelligence service, the SVR, yesterday declassified documents which appear to show that the UK and the USA approved of the Soviet occupation of the Baltic states in 1940

The editor of the dossier, Major General Lev Sotskov, told the Guardian that the documents proved that that Churchill decided it would be pragmatic not to confront soviet occupation.Moscow says its army saved the Baltic states from Nazism. The Baltic states have always bitterly argued that they were illegally occupied and then forcibly assimilated into the Soviet Union at the end of the second world war. Latvia's president, Vaira Vike-Freiberga, yesterday told the Financial Times that NATO's first summit in Riga would "remove the very last traces of the iron curtain" from the Baltic states. 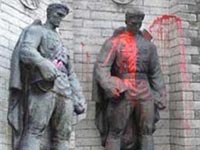 The dossier was commissioned by the lower house of the Russian parliament and the timing of its release hints at a desire by Moscow to sow dissent between western Europe and the Baltic states. The Kremlin has tense relations with all three Baltic states and is incensed at Estonia's plans to remove a monument to Soviet soldiers who "liberated" the city in 1944 after three years of Nazi occupation. Asked what reaction he expected to the dossier in the Baltics, Gen Sotskov said: "That's their problem. All I can say is that the SS was recognised as a fascist organisation at Nuremberg, but in those countries people still march under its flag." Sergei Ivanov, a spokesman for the SVR, said the dossier was not published to coincide with the Riga summit but was "probably connected with the fact that monuments are being taken down in the Baltic states". 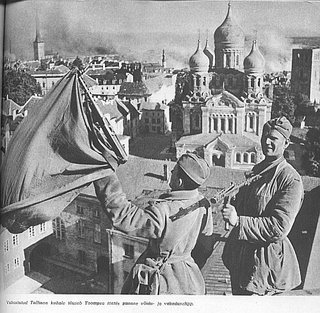 Soviet "liberation" of Tallinn
The Interfax news agency puts a more anti Baltic slant on the news claiming that the USSR was justified in annexing the Baltic states in WWII, as their governments supported Nazi Germany

According to Interfax the USSR accused Estonia conspiring with Latvia and Lithuania against it, and issued an ultimatum in June 1940 , demanding among other concessions that more Soviet troops be allowed to enter the three countries. In the following month, local communists loyal to the Soviet Union won parliamentary "elections" in all three countries , and in August these parliaments asked the Soviet government for accession to the Soviet Union. As a result, the three states were formally annexed.

While I am always keen for history to be looked directly in the face, no matter how unpalatable the truth may be, all the Russians are doing here is shit stirring.

Did the UK actually support the Baltic annexations? I don’t think so but would not have been able to do much about it in any case. That may sound harsh but since they were divided by an awful lot of enemy held land and water there would have been no chance of sending any support even if it wanted to. However, in the light of the support it offered to Poland in 1929 and planned to offer to Finland not many months later it would probably have been worse than useless anyway.

Although the Red Army cleared the Nazis out of the Baltic states they installed a regime that was every bit as brutal and repressive. It is no wonder that their citizens are not well disposed towards Russia.. But to describe the Baltics to be a bunch of jackbooted thugs as Sotskov seemed to imply will not do much to improve relations.

As for communists winning parliamentary elections after invasion, I wonder how fair they were? Let me be a tad cynical and suggest that they might have been rigged (A communist rig an election? Heaven forfend!)

I hope that the NATO states treat this Russian stunt with the contempt it deserves.

And let us not forget the fact that soviet union and nazi germany were allies until july of 1941 . Remember Molotov-Ribbentrop pact - Soviet oil and iron fueled german warmachine.

The funniest part is that Russian media admitted ocupation of Estonia :D Usually they call it "welcomed liberation" or voluntary affiliation ...

Absolutely right Mina.The German/soviet pact was an utterly cynical litle alliance between two of the most brutal tyrants we have ever seen.

I get the feeling it is Mullet

The picture of the "liberation" of Tallinn does not reveal a revealing fact -- it was the Estonian and not the Nazi flag that the "liberators" hauled down; the Germans had already retreated from the city, and the Estonians made a doomed attempt to assemble a broad coalition government.

Re Sotskov's comment on people in the Baltics still marching under the SS flag -- that's not the case, of course. In Latvia, some surviving Legionnaires (most of whom were illegally conscripted -- a fact admitted to even in Soviet documents) lay flowers at the Freedom Monument and attend church services. They don't have any sympathy for Nazi ideology, they do not "march," they do not wear uniforms or any Nazi insignia, and the flag they fly is the Latvian flag. (The same cannot be said of many of the Soviet veterans here, whose sympathies are very often odious.) Sotskov's remark is especially absurd because he means it to apply to all three countries -- occupied Lithuania refused to establish Waffen-SS divisions.

The accusation that the Baltic governments "supported Nazi Germany" prior to the invasion is beyond ludicrous, obviously -- all three of our countries had been forced to sign "Mutual Assistance Pacts" with the USSR by the autumn of 1939, agreeing to admit 70 000 Russian troops long before the June 1940 invasion. Finland refused to sign a similar agreement and was summarily invaded. The number of troops actually brought in was even larger, and the Soviets also violated the Pact by using Estonian air bases in the bombing of Finland.

This latest claptrap consists of the same stale lies that the Soviets churned out for decades. It so happens that Molotov expressed complete satisfaction with the progress of these "Mutual Assistance Pacts" even on the eve of April 1940.

The accusations and trumped up charges about our supposedly violating the Pacts came later, to justify the invasion; they included such grave violations as the publication of an article in Revue Baltique about Baltic co-operation (this was a sin because it failed to mention Russia, "also a Baltic state"...).

Ironically, not a few of the Soviet complaints against the Baltics in 1940 were actually about our Germanophobia. On May 28, for instance, Pravda complained that Estonian intellectual circles were pro-British and anti-German. In December, the Soviets had pressured the Latvian government into signing a disadvantageous trade agreement with the Nazis -- urging Latvia to supply Germany, then Stalin's beloved ally, with some of the food it had promised to Hitler's régime.

The Kremlin's propaganda mill should try to hire new talent.

Thanks very much for your response Peteris, most illuminating as ever. It was one of those stories that caught my eye and made me thing "this is a crock". As you know I am attracted to the murky backwaters of history and am always happy to look such matters in the face.

Your response has given me food for thought. Can you sugggest any good reading matter on the subkect that would be readily available in the UK, Peteris?

To my mind, the best book on the subject is still Albert N. Tarulis' Soviet Policy toward the Baltic States, 1918-1940, published by the University of Notre Dame Press in 1959. It's no longer so "readily available," I suppose, but it's online at questia.com (which is a subscription site) and I do know people who've recently obtained copies from online booksellers.

A very interesting collection of documents is Bronis J. Kaslas' The USSR-German Aggression Against Lithuania, published by Robert Speller and Sons in New York in 1973; though focused on Lithuania, the Soviet demands and the invasion were essentially the same for Estonia and Latvia (except that the Molotov-Ribbentrop Pact [23 August 1939] originally gave Lithuania to the Germans -- this wasn't amended until 28 September... Stalin and Hitler dickered over the specifics of who got what, and the gold and metals to be traded for it, for quite some time, even unto 1941), so many of the documents in the tome cover all three countries. It includes a rare copy of the Revue Baltique article I mentioned in my previous comment, for example (like many Balts, the article's author was deported in 1940 and died in the USSR). Though this article was actually mentioned in the ultimatum that preceded the invasion, there is [i]not a single phrase[/i] in the completely innocuous piece that could possibly be interpreted as pro-German, anti-Soviet, or in violation of the Mutual Assistance Pacts.

For a broader overview of 20th C Latvian history, containing the latest information unearthed in archives, etc., there is a new book that was published in English by Jumava this year (I'm one of the translators, but I'm afraid have some rather severe reservations about the quality of the book).

Online, here are two sites that are very much worth perusing --

Just to give you an idea of what happened during what Latvians call "the Year of Horror," i.e., the year preceding the Nazi invasion, something noted by Martin at soc.culture.baltics, gleaned from the latter site:

The actions of the "liberators" in Latvia and Lithuania were quite similar, of course -- and this took place in "peacetime," when Moscow and Berlin were still friends.

Thanks for the info, Peteris. I will start with the websites and work from there.