What the over sexed dog in your life needs? 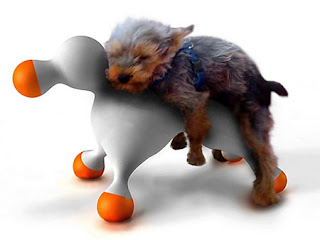 Randy dogs and legs were made for each other, just like nitro- and glycerine... ! have been fortunate never to have a dog ever seek to use my leg for sexual gratification. Others, of course, may well have suffered this indignity but help is at hand:

A French designer has come up what he describes as the Hotdoll, the first dog sex toy for dogs. The Hotdoll is a plastic playmate specifically shaped so the hips feel like a female dog. And covered with a 1cm-thick gel skin to keep them soft to the touch. They come in black, white, large and small.

Designer Clement Eloy said the Hotdolls are a 'natural way to control a dog's sexual impulses'. He said he came up with the idea after his friend's dog had to make use of a cushion and wondered why they didn't have dolls for dogs.

I had to check the date to see if April Fool’s day was three weeks too late this year! On the other hand I suppose for those dog owners who consider it somehow unacceptable for their dogs to scrabster* their legs then the Hotdoll is just the ticket I suppose....

*Scrabster: either a town in northern Scotland or the expression used by Douglas Adams in the Meaning of Liff to describe such canine capers

Blushing over here!!!!!
That is the funniest thing ever!

It's either a great innovation (well great if you're a dog!) or an utter hoax.. I couldnt resist the picture though!

Pah so people though being in the dog house was a bad thing!!