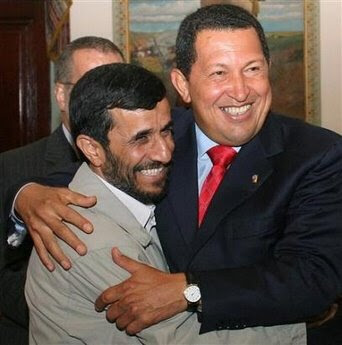 I must thank Bob of Bob From Brockley for this link.

Sadly but unsurprisingly Hugo Chavez has stood by Iran's Mahmoud Ahmadinejad, regardless of the protests that have taken place over the last week.

A Venezuelan foreign ministry statement, "in the name of the people," hailed the "extraordinary democratic development" that resulted in Ahmadinejad's victory.
"The Bolivarian government of Venezuela expresses its firm rejection of the ferocious and unfounded campaign to discredit, from abroad, that has been unleashed against Iran, with the objective of muddying the political climate of this brother country," said the statement issued June 16. "We demand the immediate end to maneuvers to intimidate and destabilize the Islamic Revolution."”

This sort of tripe makes me sick to be a leftist. For the likes of Chavez, Milne, Galloway and far too many others it does not matter what sort of scumbag someone is so long as they are anti American

Aren’t we meant to be better than this?

Bob has collated an excellent series of posts on Iran from around the blogosphere... oh and drivel from some tit called Jams O'Donnell!
Posted by jams o donnell at 12:01 am

Sorry to inform you that those on the far left are advocates of despotism. There is a world of difference between laborites and communists.

Far too many are,, sadly

Jayzus, Jams - this shot could cause nightmares to kids and worse to pregnant people. Have mercy ;-)

Let me explain something in plain and simple terms. A European Laborite can disagree with an American moderate, but share common values. We differ on how to get there, but there is in general a respect for the law and people.

When you move to Communism there is zero respect for the people. A neolord needs to act on behalf of the unwashed masses who want nothing to do with despotism.

Chavez and his goon like apologists
are just feudal lords with good PR.

Chavez, Galloway et. al aren't leftists. They just support another form of exploitation of the workers.

I have not commented about what is going on insode Venezuela, but for me his support for vile scumbags across the word show the measure of the man in my view Beakerkin

I fear you are right Hunter!