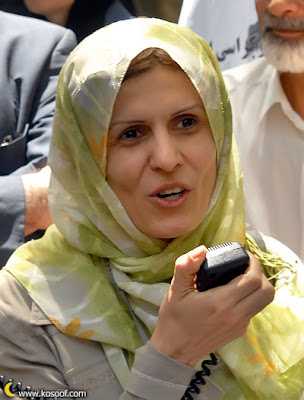 Jila Baniyaghoob (above)who was arrested with her husband Bahaman Ahamadi Amoee on 20 June. Their whereabouts are unknown but probably they are held in the security wing of Tehran’s Evin prison.

In the space of two weeks Iran has beaten both China and Cuba to the top spot with more than 33 journalists in jail in Iran (the figure will almost certainly rise further). At least 25 journalists arrested since the disputed election remain in prison, the Paris-based organisation said on Friday.

This clampdown has also seen Iran jump above Burma, which RSF claims has 14 journalists in jail, Eritrea, which has 17 jailed reporters, Cuba with 24 and even China, where 30 reporters – out of the 166 that RSF claims are imprisoned worldwide.

RSF fears for the safety of those imprisoned in Iran. "Several witness accounts make us fear that torture and ill-treatment are being systematically inflicted on prisoners who have demonstrated against the regime," RSF added."Several journalists and bloggers were brutally treated by the guards and by men employed by the state prosecutor, Saaed Mortazavi."

Amnesty International today called for the Iranian authorities to release the journalists arrested since the elections.

"It is shocking that journalists whose job it is to provide information to others are being detained, on top of all the other draconian measures the authorities have taken to restrict the free flow of information about what is really happening in Iran," said Hassiba Hadj Sahraoui, the deputy director of Amnesty International's Middle East and North Africa programme.

"Rather than trying to investigate alleged abuses, the only message the authorities are sending is that they are seeking to hide the truth, both from their own citizens and the rest of the world."

I wonder if George Galloway or Seumas Milne will be protesting the incarceration of their comrades in Iran? Shall I hold my breath?

One thing is for sure Jila Baniyaghoob and her husband are worth a million Galloways
Posted by jams o donnell at 12:02 am

A worrying state of affairs. Agree with you re Galloway.

It is welshcakes. Galloway's a turd

It will be worse than waterboarding there.

Yeah, I guess Cuba must take some urgent measures now to sort this infamy out.