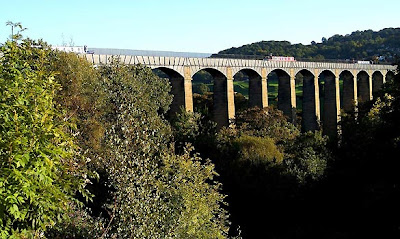 According to today’s Times the Pontcysyllte aqueduct and canal in North Wales has been designated by UNESCO as Britain’s newest World Heritage Site - the British site to be so designated.

The 200-year-old structure near Llangollen was built by Thomas Telford and William Jessop between 1795 and 1805. It is the longest and highest aqueduct in Britain. Heritage lovers have campaigned for more than six years to have the aqueduct recognised alongside the world’s best known cultural and historical sites. Last night their campaign finally succeeded when it was added to the prestigious list by officials at the United Nations Educational, Scientific and Cultural Organisation (Unesco) meeting in Seville, Spain.

“We are absolutely over the moon," said Dr Dawn Roberts, economic development manager for Wrexham Council. "We have been working on this for so long and it means so much to those of us that are from this area. To have our aqueduct and our canal named as a World Heritage site is amazing. There is so much local pride and a lot of celebrations going on.” Dr Roberts added: “World Heritage status does not bring with it any prize or money, it is more of a badge of honour. It is an awesome sight and one of those sites in the world we feel people must visit.”

Pontcysyllte aqueduct and canal is the third site in Wales to be granted World Heritage site status. The other two are Blaenavon Industrial Landscape and the Castles and Town Walls of King Edward in Gwynedd.
Posted by jams o donnell at 11:13 am

I'm really glad to hear it. I found it very interesting because was under the impression that the UK wasn't going to apply for inclusion on the list because, I thought, the cost of keeping a site at an acceptable standard was so high. I can't remember where I heard or read this, so I can't check, and I'm obviously wrong anyway.

Coincidentally, I'm about to do a post on Le Havre which was rebuilt immediately after the war. I've often passed through Le Havre but only recently realised it was a World Heritage Site too. People think it's unattractive and question its inclusion but I believe they miss the point of WHS.

This looks like a real worthy candidate - beautiful. Only, for tourists' sake - rules of pronunciation for Pontcysyllte... oh well, you know...

The World Heritage thing is not only about great beauty or obvious places of historical importance. Quite a few of our sites acknowledge that the UK was the cradle of the Industrial revolution

I thinks so James

It certainly is Snoopy. As for promunciation. I fare badly with English let alone Welsh!

That's great, that aqueduct has always fascinated me.

It is a wonderfu;l sight isn't it Cherie