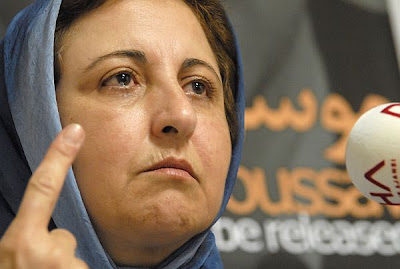 Nobel Peace Prize winner Shirin Ebadi has written an important piece in the Hufffington Post. This is an extract. The full post is here

On Monday, June 15, more than 1 million people marched in the streets of Tehran to support Mir Hossein Moussavi and Mehdi Karroubi -- two defeated presidential candidates -- and to object to the results of last week's election.... Peaceful demonstrations ended, and while people were slowly dispersing to go home, suddenly, from the rooftop of a building belonging to Basij (the volunteer people's militia), shots were fired on the people. Another group started firing from another direction. Based on reports, there are seven killed and around 30 wounded and hospitalized thus far.

People's dissatisfaction with the results does not concern the present elections alone: Many objections were made four years ago when Mahmoud Ahmadinejad was first elected president. At the time, Mehdi Karroubi and Ali Akbar Hashemi Rafsanjani, two senior and powerful figures of the Islamic Republic, were Ahmadinejad's opponents.
Ahmadinejad's four years of presidency resulted in people's great dissatisfaction.

During this time, inflation reached 25 percent, prices kept increasing on a daily basis, and people's purchasing power kept decreasing. A large number of newspapers were closed down, an increasing number of political and human rights activists were imprisoned, the offices of the Center for Human Rights Defenders (I am chair of the center) were closed down, etc.

The Leader of the revolution continued his support of the president in spite of the people's dissatisfaction, even after the Majles (parliament) declared that $1 billion had been withdrawn without legal authority. And the moment the Interior Ministry declared Ahmadinejad winner of last week's election, the Leader congratulated him, although votes had not been counted in all districts. Furthermore, other candidates had the right to contest the elections results, and no one should have been congratulated until their objections had been heard and definitive results been determined. This premature act of congratulating angered the Iranian population.

Objections to the last week's election are generally as follows:

1. At most voting locations, Mir Hossein Mousavi and Mehdi Karroubi's representatives were not allowed to be present.

2. It is claimed that many of the ballot boxes have been tampered with.

3. Ahmadinejad obtained 14 million votes in the previous elections. This time, however, they made the unprecedented announcement that he had 24 million votes. Mehdi Karroubi announced that his votes were less than the number of his election headquarters' members and the members of the "Etemad Melli" party, which he heads. When millions of people in Tehran and other cities came out on the streets to protest the elections results, it was clear that Ahmadinejad's 24 million votes could not have been accurate.

The intensification of popular protests has resulted in the Leader of the Islamic Republic ordering an investigation of the complaints and the Guardian Council announcing that some of the ballot boxes would be recounted. It does not appear, however, that this will calm the situation.

The best solution for establishing peace in Iran consists of:

1. The unconditional release of every individual arrested and imprisoned for having objected to the results of the elections.

2. Ordering the cessation of Basij and police violence toward protestors.

4. Ordering new elections under the auspices of international organizations.

5. Paying compensation to the injured and to the families of those who have been killed.

Calm could perhaps be brought back to the Iranian society if these conditions are met. Otherwise, there is a great possibility of increased violence in Iran.
Posted by jams o donnell at 11:26 pm

You've see today's announcement by the Supreme Leader, haven't you?

I did and it was horrible reading

Take a look at that:

Thiose figures lok a little dubious. Ahmadinejad is a scumbag but he is not that unpopulr. Still it is clear there was blatant riggin undertaken