When you thought Richard Nixon’s reputation couldn’t be tarnished further.... 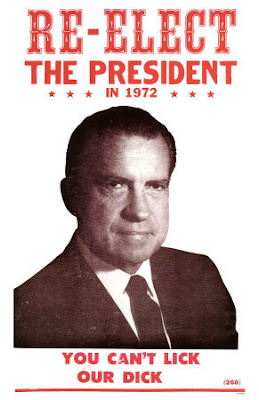 Last week, the New York Times carried a report concerning the release of new tape recordings and documents made public on Tuesday (23 June) by the Nixon Presidential Library.

Although Nixon made no public statement on Roe v Wade (which 22 January, 1973 struck down laws criminalizing abortion) one segment indicates that he was worried that greater access to abortions would foster “permissiveness,” and said that “it breaks the family.”

However he did see a need for abortion in some cases: “There are times when an abortion is necessary. I know that. When you have a black and a white,” he said before adding, “Or a rape.”

So there you have it - yet another vile comment from one of the USA’s vilest presidents. I am not sure what could show him in a even worse light... a photo of him sodomising Checkers perhaps?
Posted by jams o donnell at 3:16 pm

Abortion is a topic I leave alone, as it is as explosive as Palestine. I do have my views on what it does to the family in the long run - interestingly, in Russia, there are estimates most women usually have around six or seven of them in their reproductive life.

I've always wondered why people don't use even natural contraception methods. Done right, they can be effective.

It's one where I support the woman's right to choose but it is not a position to take lightly, Before the fall of teh Iron curtain contraception was hard to get wasn't it? In a country like Romania which had an ugly form of Nationalism, aabortion was illegal. A key reason was to ensure the birth of lots of new Romanians

I'm not surprised that Nixon said that. In fact, it's the sort of thing I'd expect from him.

He did seem to be a pretty vile character

Look at Nixon's actions regarding Israel. Ask Israeli political leaders if they would rather deal with Nixon or Bill " Egomania" Clinton. Actions speak louder than words.

But he still said what he said beakerkin