Death comes with a purr rather than a scythe 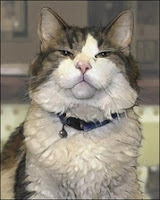 Oscar is a two year old cat that lives at a nursing home in Rhode Island. As can be seen he is a handsome fellow but he developed a reputation as an angel of death.

Oscar, who was adopted as a kitten by staff at the advanced dementia unit of Providence's Steere House Nursing and Rehabilitation Centre, has revealed an uncanny tendency to pick which patient is going to die next. According to David Dosa, a geriatrician at Rhode Island Hospital in Providence, Oscar makes regular rounds, looking in on patients and giving them a quick sniff, before either moving on or settling down for a cuddle.

His predictions appear so accurate that staff immediately start summoning family and clergy to the soon-to-be deathbed. "No one dies on the third floor unless Oscar pays a visit and stays awhile," Dosa wrote in the New England Journal of Medicine. "His mere presence at the bedside is viewed by physicians and nursing home staff as an almost absolute indicator of impending death, allowing staff members to adequately notify families, Thus far, he has presided over the deaths of more than 25 residents."

Dosa did not offer any explanation for Oscar's ability. The patients are not yet believed to have spotted his skill.

At present the not-wife has three cats atempting to sit on her.... She has not seen this news story yet....

I suppose the soon-to-be-deceased are less likely to move around and disturb him when he settles down for a nap.

Our old cat used to sleep on your chest if you were ill in bed.

My cat Mall wouldn't leave my mum alone and kept lying on her side, she later found out she had a kidney infection.

So, do having a cat and 2 dogs trying to sit on you count as an apocalypse?

I saw that. He has such a scary face: No, Mr Bond, I expect you to die. I wonder if people die of fright when they see him. Knowing he's a harbinger of death ...

Could be Roger. That or he can sense some matabolic change. Or operhaps he is evil and wants humans to die!

apocalypse? I can see four horsemen riding out Alison!

He does have that Bond vilain look doesn't he Liz! With that face, I wouldnt be surprised!

hipparchia of Over the Cliff points us to an LOLcat with capabilities similar to Oscar's...

Good one. Thanks for letting me know Steve!

I worked in a nursing home many moons ago. There were 2 Bedlington terriers who used to visit every resident throughout the day (mainly at meal times!) but would reuse to enter a room i someone was in their inal stages o life. Spooky but true

Animal behaviour of that sort doesn't surprise me really. If dogs can detect human ailments, I would not be surprised if dogs or cats could perceive changes we humans can't