In a post yesterday I drew attention to the poetry of the British warrior of songun Dermot Hudson. His work can be compared in stature to that of the poet laureate Alfred Austin, Roger B, a naturalist, photographer and regular commenter on the Poor Mouth (and thus a splendid fellow) compared Hudson’s work to Scottish Victorian-era poet William McGonagall. 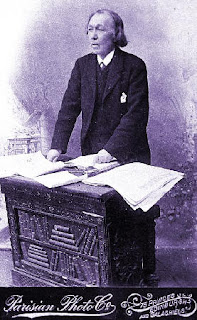 Born in 1825, William Topaz McGonigall did not discover his poetic talents until he was 25 years old His first poem, An Address to the Rev. George Gilfillan set. Rev. Gilfillan commented "Shakespeare never wrote anything like this." McGonagall is viewed as the worst poet ever to have written in the English language. Of his 200 works perhaps the worst is the Tay Bridge Disaster:

It must have been an awful sight,
To witness in the dusky moonlight,
While the Storm Fiend did laugh, and angry did bray,
Along the Railway Bridge of the Silv'ry Tay,
Oh! ill-fated Bridge of the Silv'ry Tay,
I must now conclude my lay
By telling the world fearlessly without the least dismay,
That your central girders would not have given way,
At least many sensible men do say,
Had they been supported on each side with buttresses,
At least many sensible men confesses,
For the stronger we our houses do build,
The less chance we have of being killed.

It is atrocious stuff but is it worse than songun? For all his ineptness McGonigall never waxed lyrical about an evil and brutal dictator as Hudson does. It’s a hard call but perhaps William Topaz can now hand over the baton.

If you wish to know more about McGonigall this site McGonigall online is an excellent place to start.

My favourite line from McGonagall has to be:

"For seldom burglary is committed in a state of sobriety"

Now that IS a good one!

Sure Hudson commemorates brutal dictators, but he lacks WTM's longevity and uniformity of dreck. Anyone can get lucky once with a bad poem, but Bill McGonigall did it for years.

OKay so perhaps I am a little hasty but if we can see more examples of his poetry then decide. TThat said the genre that is songun poetry is truly in William Topaz's spirit.

Thanks for that Jams - cheered up my morning! A tragically undervalued figure in bad British poetry - When I asked the Dundee tourist info where I could find McGonagall's house, they asked me who he was :(

I had never been exposed to McGonagall before, and I whether like his style. Thanks so much for sharing this.

Glad you liked it John. I would have thought the tourist office would had known that!

McGonigall and Hudson could both give doggerel a bad name! Your example of McGonigall's work most certainly qualifies as doggerel in the most pejorative sense of the term. Don't worry: I shall not seek to emulate them in my own work. :)

I am relieved to hear that Steve! There is but one MacGonagall! there is one Hudson.. in the case of teh former, I it's a pity there was only one of them, as for the latter, it's a pity that there is even one of them!

Set that baby to a tripping beat, and you got a new dance hit on your hands!

Great idea... To be honest it isn't much worse than a lot of lyrics..