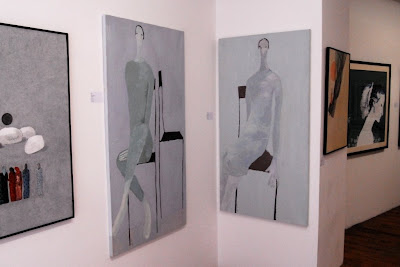 Regular readers will know that I have a great love for the work of Elahe Heidari an extremely talented artist who lives and works in Tehran. Elahe is already well regarded in Iran her works have been exhibited in India, Portugal and (shortly) Germany. I was delighted, therefore, to hear that several of her works were to be included in an exhibition of young Iranian artists called Heaven on Earth Now at the Brick Lane Gallery , London from 23 October to 2 November.

This being the first time her works were exhibited in London I had hoped to attend a well-organised event. Sadly I was mistaken. Only two of her works were actually on the walls and these were very poorly placed. Putting two large paintings together at a corner (as you can see from the above photograph) hardly does them justice. It was not just Elahe's work - other paintings were not well placed either. To be honest I've seen pictures hung better on the walls of a kindergarten.

Worse, at least two of her other works (I didn't turn over all of the other paintings) were simply leant against the wall, one on top of another. It hardly made a good impression and I can't imagine it did the paintings much good either.

Elaheh Heydari tells the story of her women starting with the special texture of her paint on canvas, a texture which.... resembles a plaster that was not supposed to be painted upon. What you see are mementos that children or at times adults write on walls and quickly run off not to get caught...

Hmm as if she daubed "Tracey Slag does blow jobs for cigarettes on a wall then ran off? I don't think so!

The simplicity of the lines and the forms as well as the compositions reflect the painter and her character's fear and anxiety of getting caught - having their secrets exposed -and capture the fear and vulnerability resulting from that fear...

I won't go on but suffice it to say that I concur with the not-wife when she said "Eh? Haha! Who wrote this bollocks?"


I did not think the organiser was justified either when he made what I considered a disparaging remark about Minoo Emami's work - He considered her work to be in a rut and that nobody would want to buy it. I disagree entirely of course.


For me Elahe's London debut was very disappointing - The organiser did not seem to have much idea about hanging the exhibits to ensure that they were at least adequately presented. This may have been exacerbated by the size of the Brick Lane gallery itself which was clearly too small for the exhibition. That is not a slur on the gallery itself; it is a fine gallery.


The organiser's motive was clearly to make money from this exhibition. That is not a criticsm of course. However I wonder if some buyers were put off by what what seemed to be a shoddy display. I hope that the second appearance of her work here in the UK will be better organised.
Posted by jams o donnell at 7:07 am

I haven't heard of her before, but it's been an interesting read.

What a shame the exhibition wasn't organised properly. I think people would put off purchasing the paintings weren't displayed their best advantage.

She is a very talented artist Ellee and a very charming and self effacing person.

It was a big shame Cherie. Elahe had sold teh paintings to teh orgainser so if they sell poorly then it is his problem. Still I did not want to see her work in such a shoddy display

Very disappointing Jams, both to you but more so to the artist. As you say hopefully better next time.

Hmph. As my lovely s.o. has kindly observed, if you're good enough, it doesn't matter if you're well hung.

Seriously... first exhibitions in a locale often say more about the exhibitors than the artists. Heidari's work will appear again and again in the UK, each time to better effect and higher esteem. Count on it.

Haha Steve... the not wife said I was hung like a gorilla. I was pleased until I read about that aspect of gorilla anatomy, but I digress!

I really hope it will Steve. She has quite a reputation in Iran now. I hope that will spill over to here

Wow, Jams, you're very passionate about your art. I can relate. (Among other things, I majored in art history at college.) At the same time, must admit that I still have yet to find a contemporary artist whose work I truly get wow-ed by... :S

I feel much the same about most contemporary art. That said, YTSL, the art scene in Iran is flourishing