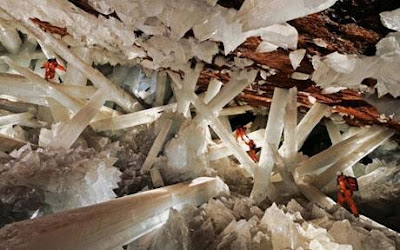 Monday's Telegraph carried this item about a crystal cave that was discovered in Naica in the Chihuahuan Desert of Mexico by two miners excavating a new tunnel for a commercial lead and silver mine.

Known as Mexico's Cueva de los Cristales (Cave of Crystals) it contains some of the world's largest known natural crystals–translucent beams of gypsum as long as 36 feet. The crystals thrived in the cave's extremely rare and stable natural environment. Temperatures hovered consistently around a steamy 136 degrees Fahrenheit (58 degrees Celsius), and the cave was filled with mineral-rich water that drove the crystals' growth.

Modern-day mining operations exposed the natural wonder by pumping water out of the 30-by-90-foot cave, which was found in 2000."There is no other place on the planet," said geologist Juan Manuel García-Ruiz.Where the mineral world reveals itself in such beauty. It's the Sistine Chapel of crystals."

The full story of this amazing cave will appear in the November issue of National Geographic... I think I'll be getting a copy asap.

This is just the sort of thing guaranteed to appeal to me. It looks like a magical place.

It's utterly amazing isn't it?

It's a true wonder of nature isn't it Calum?

I don't think words will do this beautiful find any justice. It's truly amazing.

It truly is Toia

WOW! I don't even like being in a cave but this one I would like to check out!
My spelunking experience was in a cavern in Missouri. We literally had to watch out for bats, although I knew they wouldn't hit us, I kept diving anyway!
One nice thing, though - it was 95+ outside and inside it was 60...
~~~Blessings~~~

Who's guilty of serving crystal to miners? Seriously... these formations are strikingly beautiful. Thanks for posting this.

Spectacular! What a marvel. I hope it remains unspoiled.

THanks I'm glad you enjoyed this. I looked at teh photo and said WOW! Nature never ceases to amaze

That is amazing and beautiful.

Absolutely cherie. Not sure about teh clear but definitely beautiful James

so beautiful ...a very magical place that would that would be interesting to all ages

Absolutely Sally. THe problem is that the temperature is pretty horrendous!