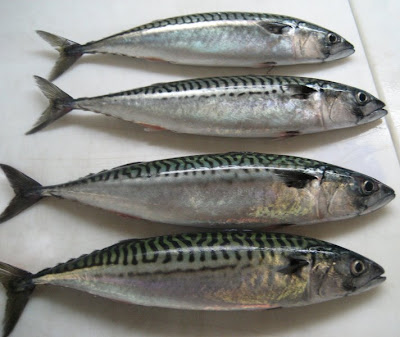 The Breaking news section of the Fortean Times is a goldmine of weird and wonderful news. (The magazine is well worth buying – been a subscriber since the mid 80s). And it’s not just Bigfoot or UFO stories. It is just as likely to link to items such as this:

Earlier this month Justin Scheck wrote an article in the Wall Street Journal about a new currency that is taking hold in the US prison system. Where once cigarettes reigned supreme it would seem that the humble mackerel is now king:

....When Larry Levine helped prepare divorce papers for a client a few years ago, he got paid in mackerel. Once the case ended, he says, "I had a stack of macks.".Mr. Levine and his client were prisoners in California's Lompoc Federal Correctional Complex. Like other federal inmates around the country, they found a can of mackerel -- the "mack" in prison lingo -- was the standard currency.

"It's the coin of the realm," says Mark Bailey, who paid Mr. Levine in fish. Mr. Bailey was serving a two-year tax-fraud sentence in connection with a chain of strip clubs he owned. Mr. Levine was serving a nine-year term for drug dealing. Mr. Levine says he used his macks to get his beard trimmed, his clothes pressed and his shoes shined by other prisoners. "A haircut is two macks," he says, as an expected tip for inmates who work in the prison barber shop.

There's been a mackerel economy in federal prisons since about 2004, former inmates and some prison consultants say. That's when federal prisons prohibited smoking and, by default, the cigarette pack, which was the earlier gold standard. Prisoners need a proxy for the dollar because they're not allowed to possess cash. Money they get from prison jobs (which pay a maximum of 40 cents an hour, according to the Federal Bureau of Prisons) or family members goes into commissary accounts that let them buy things such as food and toiletries. After the smokes disappeared, inmates turned to other items on the commissary menu to use as currency.

Mackerel supplier Global Source Marketing Inc. says demand from prisons has grown since 2004... Mackerel is hot in prisons in the U.S., but not so much anywhere else, says Mark Muntz, president of Global Source, which imports fillets of the oily, dark-fleshed fish from Asian canneries. Mr. Muntz says he's tried marketing mackerel to discount retailers. "We've even tried 99-cent stores," he says. "It never has done very well at all, regardless of the retailer, but it's very popular in the prisons."... Unlike those more expensive delicacies, former prisoners say, the mack is a good stand-in for the greenback because each can (or pouch) costs about $1 and few -- other than weight-lifters craving protein -- want to eat it.

So inmates stash macks in lockers provided by the prison and use them to buy goods, including illicit ones such as stolen food and home-brewed "prison hooch," as well as services, such as shoeshines and cell cleaning.

The Bureau of Prisons views any bartering among prisoners as fishy. "We are aware that inmates attempt to trade amongst themselves items that are purchased from the commissary," says bureau spokeswoman Felicia Ponce in an email. She says guards respond by limiting the amount of goods prisoners can stockpile. Those who are caught bartering can end up in the "Special Housing Unit" -- an isolation area also known as the "hole" -- and could lose credit they get for good behaviour.

Ethan Roberts knows about mackerel discipline first hand. Mr. Roberts, who was released in 2007 after serving eight years on a methamphetamine charge at prisons including the La Tuna (surely shome mishtake!) Federal Correctional Institution in Texas, says he got busted for various piscine transactions. "I paid gambling debts" with mackerel, he says. "One time I bought cigarettes for a friend who was in the hole."

There are other threats to the mackerel economy, says Mr. Linder, of Power Commissary. "There are shortages world-wide, in terms of the catch," he says. Combined with the weak dollar, that's led to a surging mack. Now, he says, a pouch of mackerel sells for more than $1 in most commissaries. Another problem with mackerel is that once a prisoner's sentence is up, there's little to do with it -- the fish can't be redeemed for cash, and has little value on the outside. As a result, says Mr. Levine, prisoners approaching their release must either barter or give away their stockpiles.

That's what Mr. Levine did when he got out of prison last year. Since then, he's set up a consulting business offering advice to inmates and soon-to-be prisoners. He consults on various matters, such as how to request facility transfers and how to file grievances against wardens. It’s similar to the work he provided fellow inmates when he was in prison. But now, he says, "I get paid in American dollars."

Given the parlous state of our banking sector I wonder how long it will be before we are back to barter... To be honest I would find it hard to stockpile a lot of mackerel given that it is possibly the tastiest fish on the planet! On the other hand I would be doing my bit to keep the value of the currency high

Mackeral is a beautiful fish to cook, so many ways from bbq to grilling to shallow fry. Can't imagine what it tastes like canned.

Fascinating.
Have a sane commuting week.

Do not place Mackerel in your bed lest you sleep with the fishes or in your case cats trying to eat the fish.

Perhaps governments could put their nations onto the mackerel standard.

No idea Nunyaa. I can't imagine it tastes that great.

Sleeps with fishes? I am not Try McLure!

It is Aileni. Onde day all business will be like this

I think we are heading that way James!

Place an entire nation on the mackerel standard? Wholly mackerel!

There I was thinking how healthy these guys would be, downing all that Omega oil. And then it goes on to say no one eats it.

BTW, what happened to the Mars Bar Index!

Ah the Mars Bar standard.. It probably went the way of the sMarathon Standard!

With all that omega oil they would have glossy coasts and cold noses!

What an interesting story Jams. It's a bit heavy to carry around however.

Perhaps we will make change with anchovies.. they should be lighter!