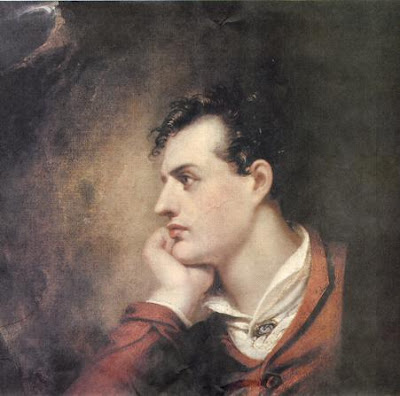 Nearly 200 years after he, invoked the battles of Marathon and Thermopylae to "dream that Greece might still be free", the Greek government has announced a Byron day on the anniversary of the writer's death.

Readings, drama and school outings will celebrate the role of the peer by dying while preparing to serve in the Greeks' revolutionary navy (and more prosaically the fact that he used his inherited fortune as the 6th Lord Byron to fit out the rebels' fleet). It will be celebrated on April 19, the date he died in 1824.

Inaugurating Byron day in parliament, the Greek government said that the initiative would burnish the memory of "a man who believed deeply in democratic values and Hellenism". Byron already has an archipelago of more modest memorials in Greece, including a chair-shaped rock on Cephalonia where he used to watch the sunset, sometimes clad in a nationalist uniform which was partly Greek and partly Scottish tartan.

Byron is also admired in Greece for his fury at Lord Elgin's removal of the Parthenon marbles. His body was refused burial in Westminster Abbey in 1824 and again, a century later, when the dean, Bishop Herbert Ryle, accused him of "outraging the laws of our Divine Lord".

Shoot. I would have offered to bury him in my backyard. I guess I'm 200 years too late for that.

I wonder if there's any more unsavories (according to England) that needs a place to rest. I wouldn't mind having some extra income.

Maybe you, jams? I'll give you the spot underneath the lopsided apple tree that smacked from Hurricane Ike and I solemnly swear to keep it free of dog poop.

Thanks EWBL. I think teh not wife planned just to leave me with the rubbish!

Don't know why it took so long.