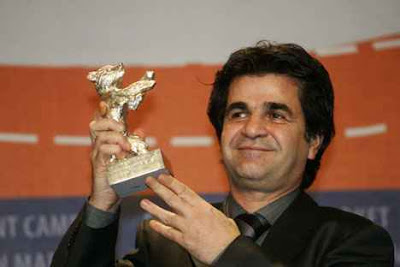 The Guardian reports that the Berlin Film Festival is to honour Jafar Panahi with screenings of his movies and a panel discussion on censorship in Iran,

Dieter Kosslick, the festival's director, said Panahi had been invited to sit on the 2011 jury to decide the Golden Bear prize for best film prior to his imprisonment. Last month he was sentenced to six years in jail in Iran and banned from leaving the country, shooting films or scriptwriting for 20 years. "We are going to use every opportunity to protest against this drastic verdict," said Kosslick.

Panahi's prizewinning film Offside, about girls who dress up as men to sneak into a football stadium, will be shown along with a number of the director's other features. The film-maker has himself previously won awards at Chicago, Cannes and Berlin.

Meanwhile the rest of the cinema world seems to be pretty silent about Panahi’s plight. The sentence handed down by the Iranian courts was an absolute disgrace.
Posted by jams o donnell at 3:04 pm

Having you heard about the recent film goings-on in Ottawa, regarding Iranium?

Thanks for letting me know Knatolee it is the first I have heard of it.

One can only hope that the regime will croak way before the 20 years are over. But frankly, their hold on the country is not growing weaker.

I hope so too Snoopy. The Iranians I know want a better country and they don't hate Israel either