Once again the TV show QI turns out to be marvelous source of information. One thing I never thought I would ever hear is a discussion of the benefits of using a goose as as an alternative to toilet paper!

But this is not a new idea, it is from Rabelais' work Gargantua. Chapter XIII, titled "How Gargantua's wonderful understanding became known to his father Grangousier, by the invention of a torchecul or wipebreech" is devoted solely to the discovery of the best and most comfortable way to wipe one's rear end.

Paper is described thus: Who his foul tail with paper wipes, Shall at his ballocks leave some chips.

In the search for a better and more effetive method of wiping roudn the ringpiece, Gargantua says:

Afterwards I wiped my bum, said Gargantua, with a kerchief, with a pillow, with a pantoufle, with a pouch, with a pannier, but that was a wicked and unpleasant torchecul; then with a hat. Of hats, note that some are shorn, and others shaggy, some velveted, others covered with taffeties, and others with satin. The best of all these is the shaggy hat, for it makes a very neat abstersion of the fecal matter.

Afterwards I wiped my tail with a hen, with a cock, with a pullet, with a calf's skin, with a hare, with a pigeon, with a cormorant, with an attorney's bag, with a montero, with a coif, with a falconer's lure. But, to conclude, I say and maintain, that of all torcheculs, arsewisps, bumfodders, tail-napkins, bunghole cleansers, and wipe-breeches, there is none in the world comparable to the neck of a goose, that is well downed, if you hold her head betwixt your legs.

And believe me therein upon mine honour, for you will thereby feel in your nockhole a most wonderful pleasure, both in regard of the softness of the said down and of the temporate heat of the goose, which is easily communicated to the bum-gut and the rest of the inwards, in so far as to come even to the regions of the heart and brains.

And think not that the felicity of the heroes and demigods in the Elysian fields consisteth either in their asphodel, ambrosia, or nectar, as our old women here used to say; but in this, according to my judgment, that they wipe their tails with the neck of a goose, holding her head betwixt their legs, and such is the opinion of Master John of Scotland, alias Scotus.

Perhaps best not to use this goose neck though 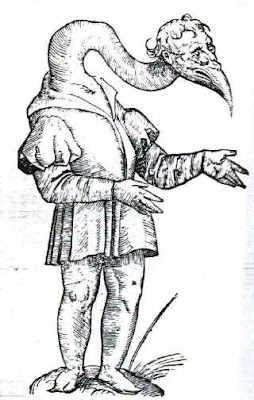 And I would not have known this but for QI given that I have never read Gargantua! Dodgy 2011 predictions can wait until tomorrow...
Posted by jams o donnell at 10:15 pm

I would strongly recommend sedating the goose beforehand, as they can be rather aggressive beasts and the nasty side-effects of bringing an angry goose into too close proximity with one's nether regions don't bear thinking about!

Is this where the term "goosed" originated?

I have to agree with Francis and chuckle at Roman's remark. Once again I've been reacquainted with why the term Rabelaisian means hilarity.

Thanks, Jams, for bringing us such important information.

Perhaps we've found a use for the LibDem manifesto.

Crushed said...
This comment has been removed by a blog administrator.
10:52 am

THat is so true Francis. With a goose in that place I would far for my genitals!

It cold be, Roman!

Absolutely, Susan. I must read Gargantua and Pantagruel it foes lok hilarious

I dunno Calum, it will leave some chips. Then again we now know where Clegg, Huhne et al came from!

Thanks for the reminder. I am into Rabelais since about age of 8 when I have first read a special kid's edition. I don't remember whether this specific topic appears in it, but I've certainly got to it in a few years. Bliss... pity that geese are a bit awkward to handle.

It has certainly spurred me on to read hi Snoopy. I love the idea of a children's version!