Sometimes the fox he win 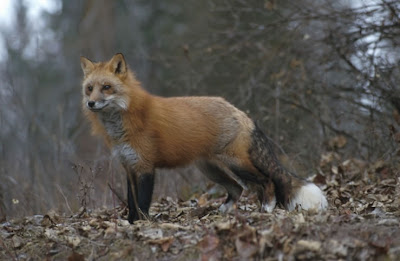 The unnamed hunter, who had approached the fox after wounding it from a distance, was in hospital with a leg wound, while the fox made its escape, media said, citing prosecutors from the Grodno region.

"The animal fiercely resisted and in the struggle accidentally pulled the trigger with its paw," one prosecutor was quoted as saying.

It’s good to se the fox get a score draw, Cases of hunters being wounded or killed by their prey are not everyday but uncommon, especially if one is a regular reader of the Fortean Times!

Anyway it gives me a perverse pleasure to see hunters get their comeuppance
Posted by jams o donnell at 1:07 pm

Yay!!!! C'mon the foxes!!!! (Leave Knatalee's nice hens alone though, please, Foxy. We could do a deal: lay off the hens and we'll leave loaded guns in the bushes on the hunters' paths.)

Smart fox! And yes, do leave my hens alone!! We do have foxes aplenty, but we've got more problems with coyotes eating hens on our farm.

H here's to more foxes besting hunters. A good idea about the guns!

Agreed so long as they leave your hens lone Knatolee!

A small victory for the Animal Kingdom eh?

Yay for the fox! There are lots of hunting accidents here but it's usually the hunters' fault (the animals don't have to take matters into their own hands)...stuff like "drunk deer hunter falls out of tree." :)

Drunk deer falls out of tree? Now that IS a good one!

If a drunk deer hunter is someone who hunts drunk deers I'm not surprised he fell out of the tree - he must have been so tired waiting for ages for one to come along. Now... a drunk DEAR hunter would have a much easier time of it, especially here in Scotland where we have plenty of drunk old dears. If I wasn't happily married I'd probably have been reduced to hunting some of them myself by now.

yay for the fox!

Outfoxed by an acutal fox! :)

Cherie, Liz, Sandy glad that others live to hear about the biter bit!

That was a good one. Go foxes!

The idea of hunting a fox (for 'pleasure', presumably) makes me feel ill. Good to hear of one who got away, and left the hunter with something to think about.

Most of hunters deserve what is coming to them, especially seeing that gallant fox. He he.

Strange that no one is rooting for the hunter!