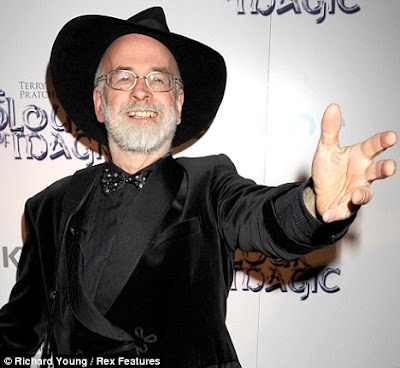 While a knighthood for cyclist Chris Hoy who won his second, third and fourth Olympic gold medals at Beijing was perhaps on the cards, it was a pleasant surprise to see Terry Pratchett get a knighthood in the New Year honours list. Terry's work will never be considered as a literary "great" but his discworld novels are thoroughly entertaining and are loved by millions worldwide. Personally, anyone who can create such wonderful characters as Lord Vetinari, Sam Vimes Mustrum Ridcully, Gytha Ogg, Gaspode and Foul Ole Ron, deserves an honour!

I hope he will be able to continue writing, despite suffering from early onset Alzheimer's
Posted by jams o donnell at 2:37 pm

He certainly has a creative imagination :-)

Well done to him for getting listed.

I am delighted for Sir Terry. I'm sorry he's having to deal with that dread disease.

It's definitely a pleasing honour!

Sir Terry... I like the sound of that! Pratchett has to be the most creative writer of comic fantasy fiction of all; he well deserves his title.

Someone had a YouTube video of an interview in response to his knighthood. The most notable thing about his Alzheimer's is that it has, at least to this point, impaired neither his vocabulary nor his sense of humor. He is still working on a novel; he observed that it takes him several times as long to write anything now, but it is still possible. We may not have seen the last of Sam Vimes yet!

Yep - rarely a more deserving man got it! Hooray to Sir Terry, one of my favorite men!

Actually I came by to say Happy New Year, Jams, to you and SWMBO. And to say thanks to your comment that made my day... no, my week.

Sir Terence David John Pratchett, OBE is a bit if a mouthful, but a very deserving reward for a man who has provided millions with a good laugh.

Happy New Year to you and yours, Jams

It's a great sound, eh? Happy New yeatr to you Steve, Bryan and Snoopy.. glad you liked the Seumas Milne comment!

Oh, this is such delightful news. He's brought so much enjoyment to so many people, and it's good that he can have this sort of feedback.