Mary Seacole to be honoured at long last

A selection panel, chaired by Baroness Amos, will make the final choice in the Spring. The statue will sit in the grounds of St Thomas' Hospital, in London.
Earlier this week it was announced that the only known painting of Ms Seacole had been bought by the The National Portrait Gallery for £130,000. 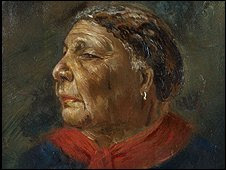 Jamaican-born Ms Seacole was painted by London artist Albert Challen.. It was discovered in July 2003 after being bought at a boot sale in Burford, north Oxfordshire but has been on loan to the gallery since 2004.
Posted by jams o donnell at 9:24 pm

I love your "faces" series. So well done!