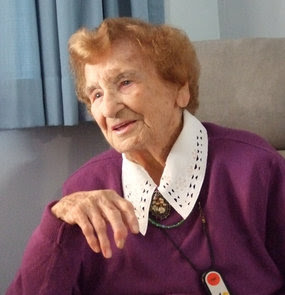 12 July: Olive Riley aged 108. Author of The Life of Riley, Olive was believed to be the oldest blogger in the world. Will I still be here spouting drivel in 2071?

20 July: Human detritus Dinko Šakić aged 86. A war criminal, Šakić was a commander of Jasenovac concentration camp where tens of thousands of Serbs, Roma, Jews and others were murdered by the Croatian fascist puppets. Šakić escaped to Argentina but happily he was extradited and was sentenced to 20 years imprisonment in 1999. The piece of vermin died in prison. Rot in hell scum.

While on the subject of scum I also hope the priest Vjekoslav Lasić who eulogised him saying "the court that indicted Dinko Šakić indicted Croatia and Croatians", and "every Croat should be proud of Šakić's name" has a miserable and painful life.

14 August: Lita Roza aged 82. In 1953 with a version of “How much is that doggie in the window?” Lita became the first British woman to top the UK singles charts.

17 August: Maudie Hopkins aged 93. Maudie was the last publicly known widow of a American Civil War veteran. In 1934 at the age of 19 she married 86 year old William Cantrell. This she did to escape a life of poverty in Arkansas. Cantrell died within three years. There may be two other surviving widows but if they exist they do not wish to be identified.

16 September John Fancy aged 85. Mr Fancy was taken prisoner in France in 1940 but resolved to change this state, making a total of 16 escape attempts. His tunnelling efforts earned him the nickname “The Mole”. He finally returned to the UK in April 1945.

29 October: William Wharton aged 82. Wharton was the author of Birdy, one of my favourite novels

It's a stunning likeness!

She was before my time of course Welshcakes

That last one is quite fascinating!

Oh my God, I forgot Jim Morrison was a Navy brat! Another one who died too soon! It makes my teeth hurt when some wannabe tries to sing "Riders on the Storm" -- no one can top his rendition.

How come I hardly know anyone on these lists of yours? I did know Olive. I discovered her when I was wondering if I was the oldest blogger, but not by a long shot. Not even in the top however many. Lots of chatty old folks it seems. However many have the assistance of techie younger ones. Too bad I do not and have to rely on other bloggers to help me when I get into trouble on the odd occasion.