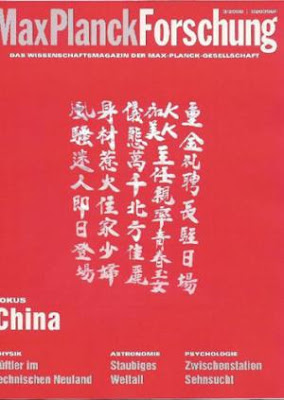 The Max Planck Institute has a bit of egg on its face according to the Independent. It wanted Chinese classical texts to adorn its journal, something beautiful and elegant, to illustrate a special report on China. Instead, it got a racy flyer extolling the lusty details of stripping housewives in a brothel.

There were red faces on the editorial board of the MaxPlanckForschung journal after it ran the text of a handbill for a Macau strip club on the front page of a special issue on China. Instead of an elegant Chinese poem to gracing the cover ity ran a text effectively proclaiming "Hot Housewives in action!" on the front of the third-quarter edition. Their "enchanting and coquettish performance" was highly recommended.

The use of traditional Chinese characters and references to "the northern mainland" seem to indicate the text comes from Hong Kong or Macau, and it promises burlesque acts by pretty-as-jade housewives with hot bodies for the daytime visitor.

The Max Planck Institute was quick to acknowledge its error explaining that it had consulted a German sinologist prior to publication of the text. "To our sincere regret ... it has now emerged that the text contains deeper levels of meaning, which are not immediately accessible to a non-native speaker,"

True or not it’ still amusing!

Email ThisBlogThis!Share to TwitterShare to FacebookShare to Pinterest
Labels: cock up

Haha! Serve them right for not calling a propwer linguist in.

Probably true! Made me smile :-)

THanks! It certainly is a good one!

Yes, they should have had one of those.

The postman only yesterday delivered my German exemplar. Haven't checked, yet, however I heard it includes a field study in which ten million Chinese men were confronted with following question:
Do you have fair elections in China, too?

Collection: Please lead the foulth wold in the second line as 'folwald'.

Gah Sean!!! are you sure you are not erally dear Dr Stu???