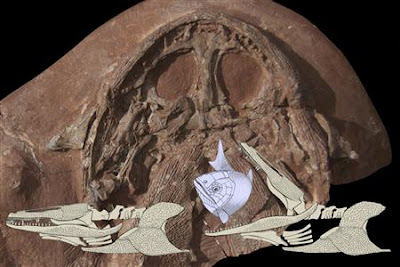 According to NewsDaily a peculiar armour-clad amphibian prowled warm lakes 210 million years ago, catching fish and other tasty snacks. Nothing particularly interesting you may say, but it had the oddest bite in the history of life on Earth.

Gerrothorax pulcherrimus lived alongside the early dinosaurs. It opened its mouth not by dropping its lower jaw but by lifting back the top of its head in a way that looked a lot like lifting the lid of a toilet seat.

"It's weird. It's the ugliest animal in the world," said Farish Jenkins of Harvard University "You almost can't imagine holding your jaws still and lifting your head back to take a bite. There are some vertebrates that will lift their heads slightly or the upper jaws when they bite. Some salamanders do it slightly. Some fish do it slightly. But no animal is known to have done it this extensively," Jenkins added.

Scientists think Gerrothorax lurked at the bottom of a lake, then with a sudden movement of the skull created a mouth gape that entrapped any fish unfortunate enough to swim by. It measured about 3 feet (1 meter) long and was stoutly protected by bony body armor reminiscent of chain mail. It had a very flat body and very flat head, short, stubby limbs and well-developed gills. Its jaws were lined with sharp teeth. And the roof of its mouth was studded with large fangs to keep any slippery fish from escaping its chomp.

Gerrothorax is one of a group of odd amphibians called plagiosaurs with no modern descendants that vanished along with numerous other species 200 million years ago in a mass extinction at the end of the Triassic Period. Its fossils were found in the Fleming Fjord Formation of east Greenland

If you think its bite is strange, just look at that armor coating, which looks almost like tree bark. Indeed, I'd say its bark... nah. Even I can't say it.

Steve I#m shocked that you can step back from a pun even of that calibre!! I would have gone in with both feet!

That photo sure is strange, with it's manlike features!

Saw this on the Nature blog, cool! I dig this kind of stuff.

It's a fascinating photo, eh?

Me too Free Man. I love this sort of oddity