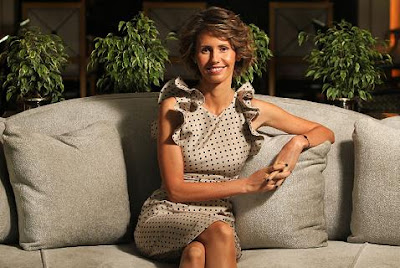 Britain may not export as much as it once did but we have provided the butcher in charge in Syria with a rather attractive wife. More or less ever since the  protests started in Syria last year (and of course the brutal repression) Asma Assad has hardly ben seen or heard. However that seems to have changed.
However, according to the Telegraph in an email sent to The Times recently (I won't pay money to read the Times online). Mrs Assad, 36, wrote that her husband "is the President of Syria, not a faction of Syrians, and the First Lady supports him in that role".

The email is said to have continued: "The First Lady's very busy agenda is still focused on supporting the various charities she has long been involved in, including the National Comittee to Exterminate Dissenters, The Bashir Al-Assad Nobel Peace Prize Nomination Committee and the National Vogue Readers Circle,  as well as supporting the President as needed (it is believed that she does so by taking pot shots at potential dissenters she encounters in the Damascus branch of Louis Vuitton).


"These days she is equally involved in bridging gaps and encouraging dialogue (She has  apparently recorded a message protestors in which she demands that they surrender and face torture or be shot and then tortured). She listens to and comforts the families of the victims of the violence (mainly by shooting them as collaborators in the protest) ."


Raised in Acton in London she is the daughter of a Harley Street cardiologist.She is Sunni whose family originally comes from Homs, the epicentre of the revolt against her husband, and the city bearing the brunt of the violence by his forces.

Personally I could not give a shit how charistmatic or stylish she is, she has nailed her colours to the mast of a disgusting tyrant. It is only a pity that she has the right of return to the UK once her husband is deposed.

If there any more worthy of being despised than the tyrants it's their skinny, fashionable wives.

Well they nail their colours to the mast of a bastard, take the good life. They deserve degree of odium

I doubt that she will outlive her hubby if they get caught by the rebels.

Poor Asma - i bet "Emma" did sign up for this when she left the UK. She thought she would be adored and now she may end up dead (probably by her husband's inner circle). Get out of Syria Asma and be smart. Take your kids and go back to UK. Let your husband be killed, as he is a murderer. What's it like falling asleep to a murderer? Do you worry he may try to kill you while you are sleeping?

If she had half a brain she would try and get out with her kids. If Assad wins she is scum for standing by him, if he loses she will end up with her neck in a noose. I will shed no tears for either of them