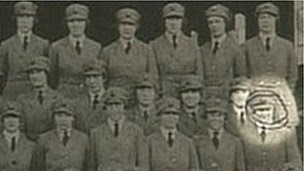 Florence Green in uniform
My thanks to an anonymous commenter who drew my attention to this piece of news. It marks the end of an era.
Just an hour or so ago the BBC reported that Florence Green, the last known surviving service member of World War I, has died. She was aged 110.
She died in her sleep on Saturday night at Briar House care home, King's Lynn. Mrs Green had been due to celebrate her 111th birthday on 19 February. She leaves behind three children, four grandchildren and seven great grandchildren.

Born in London  Mrs Green was 17 years old when she joined the Women's Royal Air Force (WRAF) on 13 September 1918 - two months before the armistice. She worked as a waitress on RAF bases in Norfolk.

Some people may cavil at Florence's inclusion as a WWI veteran but she was in uniform and she did her bit.

Makes me think of Eric Bogle's song, And the Band Played Walzing Matilda, particularly the last verse, "As year follows year, more old men disappear/ Someday no one will march there at all."

Didn't even know her but it did bring a tear to my eye. As you say, it was and certainly feels like the end of an era, a piece of history written.

Ah now that is a poignant song

Watching her talk on the BBC earlier was quite inspiring :-)

My Dad always took me to the memorial services held on Armistice Day. Seeing the veterans of WWI was always poignant.

I can imagine it was Susan.

After such a long life she deserves it Claude!

And then there were none.

I'm the one who drew attention to Florence's passing, by the way. I've been following your postings on the final WWI veterans for awhile now. I hoped that one of the last veterans could have made it to 2014 but that would have been a very difficult feat.

It's a shame that none lived to August 1914 but it was a huge ask. It was not impossible: One Puerto Rican veteran lived to 115 but he died a few years ago.

I'm glad you fond my posts on WWI veterans interesting. I suppose the subject was of interest as my own grandfather served in the Munster Fusiliers and was taken prisoner right at the very beginning of the war (at the Etreux rearguard action). He died in 1927, 36 years before I was born and when my own dad was just a toddler.

And few years of peace...