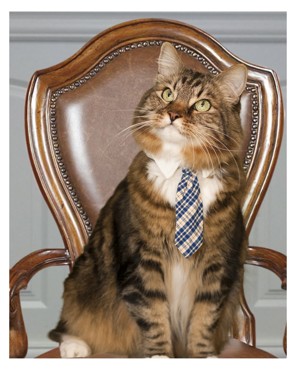 The Senate race in Virginia has taken an interesting twist as a new candidate throws its collar into the ring. Hank, a nine year old cat will be running against former Virginia governors. George Allen (R) and Tim Kaine (D). There is an age barrier for the senate. You must be over 30, but this is okay as in cat years Hank is in his 50s.

A former street dweller, Hank has never voted , wears no clothes and has a policy of milk in every bowl. He has even released an official campaign ad which is as nauseating as anything regular US politicians produce (until the very end)


Hank is not the first animal to run for office - a dog called Bosco was myor for Sunol in California in the 80s - but to be honest, looking at the shower of wankers the Republicans have to choose from I wonder if the GOP might not do worse than co-opt him as their candidate.

I wish Hank well but I have one suggestion: get some better ties!
Posted by jams o donnell at 1:30 pm

Email ThisBlogThis!Share to TwitterShare to FacebookShare to Pinterest
Labels: Hank for senate, virginia

If I am any judge of character, Hank should win hands down. Good man that.

I would imagine it's marry who you like but keep the food coming!