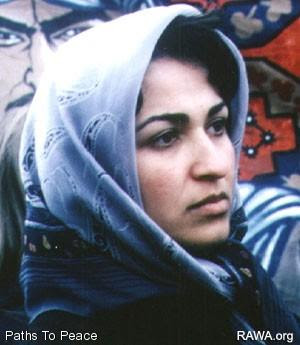 25 years ago today Meena, the founder of RAWA (the Revolutionary Association of the Women of Afghanistan) was assassinated (whether by fundamentalist scum or scum in the pay of the soviet puppet regime, it is not known... although the balance of suspicion falls on the regime scum). She was just 30 years old and had devoted all of her adult life to the stuggle for women's rights in Afghanistan. The world lost an inspirational figure that day.

Meena called the women of Afghanistan sleeping lions, pledging that one day they would awake and roar. In 1977, at the age of 20, she launched the country's first movement for women's rights, calling her group the Revolutionary Association for the Women of Afghanistan (RAWA). Its goals: the restoration of democracy, equality for men and women, social justice, and the separation of religion from the affairs of the state. But in a country mired in tradition and occupied by the Soviet Union, Meena's beliefs were threatening enough to get her assassinated. Ten years after founding RAWA, she was kidnapped and killed. 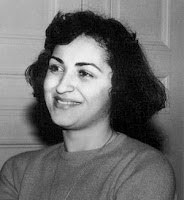 
Although the status of women has advanced a little since the downfall of the Taliban in 2001, both the Karzai regime and its western backers are at best lukewarm on women's rights and the Taliban are resurgent. RAWA are needed as much today as they ever were.

In 2006 Meena was nominated as one of the Heroes of the past 60 years by the Asian edition of Time Magazine.  It was heartening to see her name alongside those of Gandhi, Mother Theresa and Aung Sang Suu Kyi
Posted by jams o donnell at 1:54 pm

A heroine indeed. As for today's Afghanistan: as long as Taliban is fed and nurtured by Pakistan and other sympathetic neighbors, the outlook remains bleak.

The very thought of her bravery and persistence leaves me in awe.

Me too Susan. She was a great

She accomplished a lot in a short life

She was a brave and amazing woman.

She certainly did Nursie, Ans she was Cherie