Turkmenistan is another pariah state, with an appalling record on human rights. As ever this does not matter as the nation sits on huge amounts of natural gas which it is prepared to sell to the West. As a result and like Saudi Arabia none of our politicians give a flying fuck for what happens to the people there. 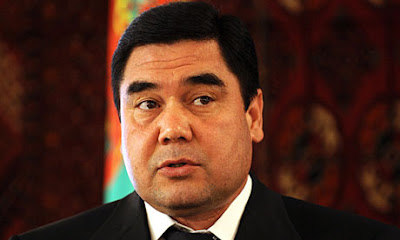 Another despot
Today's Guardian reports that ;president Gurbanguli Berdymukhamedov, has won a new five-year term by capturing 97% of the vote, election officials said.

All of Berdymukhamedov's seven opponents praised his leadership in their campaigns, making the authoritarian leader's victory in Sunday's election a formality. He improved on his performance in the 2007 election, in which he secured his first term with 89% of the vote.

The head of the central election commission, Orazmyrat Niyazliyev, said the vote was democratic and had contributed to national unity.

Annette Bohr, an expert on Turkmenistan at the London-based Chatham House institute, said the election presented only the facade of a democratic process. "It is the typical faux democracy that you see in so many countries," Bohr said.


Berdymukhamedov, 54, came to power after the death of predecessor, Saparmurat Niyazov, in 2006 and promised to open up the tightly controlled political system.

The only international observation mission overseeing the election was a delegation from the post-Soviet Commonwealth of Independent States (CIS), which frequently offers positive assessments of votes criticised by more established monitoring bodies. The CIS executive secretary, Sergei Lebedev, said the election complied with democratic norms. Monitors had noted some minor irregularities but they were unlikely to have any impact on the final result, he said.

The CIS monitors are clearly talking their arses. There is no way that any democratically elected leader can accrue such a high percentage of the vote in a free and open election.

Still, never mind, Turkmenistan will be pumping out the oil so the people can go screw themsleves.
Posted by jams o donnell at 5:34 pm

I have a feeling somebody's out looking for those people among the 3%.

A vibrant democracy of course!