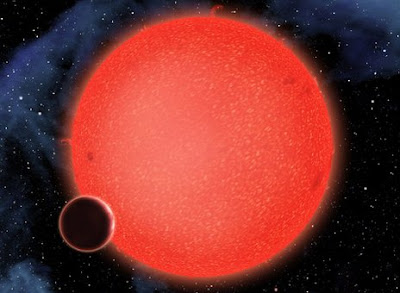 The BBC reports that Astronomers may have discovered a a new class of planet: a "water-world" with a thick, steamy atmosphere. The planet in question is GJ 1214b, 40 light-years away and Observations using the Hubble telescope seem to confirm that a large fraction of its mass is water.

The planet's high temperatures suggest exotic materials might exist there.
"GJ 1214b is like no planet we know of," said lead author Zachory Berta, from the Harvard Smithsonian Center for Astrophysics.

The planet was discovered in 2009 orbiting its comparatively cool red-dwarf star at a distance of just two million km - meaning temperatures on GJ 1214b probably reach above 200C.  It is about 2.7 times the Earth's diameter but with a mass just seven times higher (at an equivalent density, to the Earth, it would have nearly 20 times the mass).

Mr Berta and his colleagues used the Hubble Space Telescope's wide-field camera to study the planet as it crossed in front of its star - a transit. During these transits, the star's light is filtered through the planet's atmosphere, giving clues to the mixture of gases present. The researchers said their results are more consistent with a dense atmosphere of water vapour, than one with a haze.


"The high temperatures and pressures would form exotic materials like 'hot ice' or 'superfluid water', substances that are completely alien to our everyday experience," said Dr Berta.

The planet's short distance from Earth makes it a likely candidate for follow-up observations with the James Webb Space Telescope, which may launch by the end of this decade.


As ever fascinating stuff
Posted by jams o donnell at 10:29 am

Email ThisBlogThis!Share to TwitterShare to FacebookShare to Pinterest
Labels: exoplanets, GJ 1214b

When I read reports like this I'm ever grateful for all the wonderful science fiction books I've read before. It's always nice to have had an introduction to the truly strange realities.

I suspect that certain movie producers will be trying to work out a way of getting there to film "steamy scenes" on location.

I'm sure there is far stranger out there Susan.. Great isn't it!

I was thinking planet Hammam myself syncy