Australian government to apologise to olympian 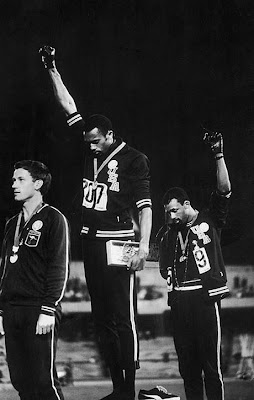 Tommie Smith and John Carlos raising their fists in the black power salute after receiving gold and bronze medals in then 200m event at the Mexico games is an the iconic image. Rather forgotten, hoever, is the silver medalist Australia's Peter Norman.

Smith and Carlos were sent home but remain heroes to this day. Norman who fully supported their action was ostracised when he returned to Australia. Although he had posted qualifying times for the Munich games he was not sent (although he was apparently carrying an injury). He was not invited in ay capacity to the Sydney games.


Earlier this week The Independent reported that the Australian federal parliament expected to apologise for the way he was treated. Norman was not there to hear it; he died of a heart attack in 2006, aged 64, having suffered from depression, ill-health and alcoholism. But his 91-year-old mother, Thelma, and his sister, Elaine Ambler, travelled to Canberra for the occasion.

Andrew Leigh, a Labor backbencher who proposed the motion, said: “In the simple act of wearing that badge, Peter Norman … showed us that the action of one person can make a difference. It’s a message that echoes down to us today. Whether refusing to tolerate a racist joke or befriending a new migrant, each of us can – and all of us should – be a Peter Norman in our own lives.”

The black power protest was the subject of a documentary, Salute, made by Norman’s nephew, Matt, who had been shocked to discover how few Australians knew the identity of the third man in the celebrated photograph.

“He is not recognised for the incredible times that he did,” Matt Norman said in 2008, when the film was released. “And he’s not recognised for standing up for something that he thought was right. He was sacrificing glory for a greater cause, and we need people like that.”

The MPs were due to support a motion recognising Norman’s “extraordinary athletic achievements” The motion also acknowledged his bravery in supporting Smith and Carlos, and his role in “furthering racial equality”.

Norman retired from athletics in 1972 after not being selected to go to the Munich games. He continued to run but the onset of gangrene after an achilles tendon injury in 1985 nearly resulted in amputation. After this he descended into alcoholism, depression and  drug dependency. 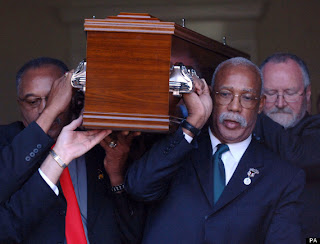 Smith and Carlos were pallbearers at his funeral in 2006.They both also delivered eulogies and carried his coffin.

his time of 20.06 seconds remains the Australian national record to this day.

I did not now about Peter Norman's story until a couple of years ago. It is clear that he was treated in a shitty manor by the Australian authorities. Sometimes long belated apologies can ring rather hollow sometimes they are necessary. It is only a shame that this apology was not given in 2005 or before.

I'll have to check if the motion was carried
Posted by jams o donnell at 4:41 pm

Poor man. What a pity the apology has come so late.

I find this so sad.

He really was treated shabbily