I would be very surprised if Trischa Zorn and Michael Phelps had never met. Michael Phelps is the most successful Olympian in terms of medals won - with 18 Golds , 2 silvers and 2 bronzes. It will probably be some time before his amazing record is approached let alone beaten.

Phelps certainly deserves his place among the pantheon of great olympians. Is he the greatest of all? THat is a tough question as comparing one sport with another is like comparing apples and oranges. Is he better than someone who lets say wins Basketball gold medals at three or four consecutive games? That is a question for other armchair sports fans.  But don't think for a second that I am doing Phelps down for this.

Few people could name multiple medal winning paralympians. In the UK Tanni Grey-Thompson would spring to mind but few others. In terms of medals won though, there is one woman who  stands out among them all and that is swimmer  Trischa Zorn 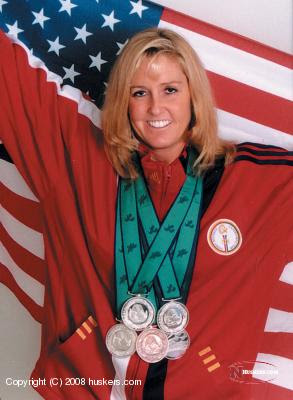 Born in 1964 and blind from birth Trischa has attended seven paralympic games. Sources differ as to the actual number of medals won but this Source appears to be accurate (including team relays) winning the following medals:

She has therefore won 37 Gold medals, 9 Silvers and 5 bronzes a grand total of 51 medals.