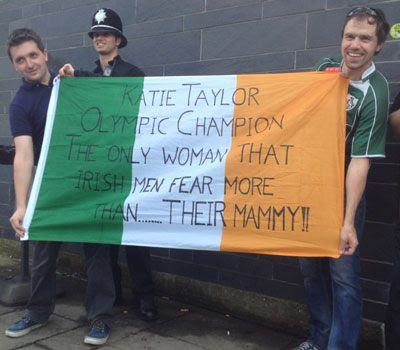 Katie Taylor won the lightweight division in the women's Olympic boxing tournament. She had been the hot favourite to win and she didn't disappoint. She brings home Ireland's first olympic gold medal since Atlanta in 1996.(Cian O'Connor won gold in Athens in the indiviiual showjumping but was stripped of his medal).

It is looking to be a successful games byy Irish standards with a gold and a bronze (Cian O'Connor won bronze  in showjumping) and three more guaranteed medals in boxing. At worst it will be a gold and four bronzes. It's not likely to be four golds and a bronze.
Posted by jams o donnell at 11:06 am

Why was she not boxing for Britain for goodness sake? Ireland is really part of Britain isn't it? I know what I am talking about you know, even though I admit that I don't know what I'm talking about. And anyway, womens' boxing? Why is she not in there fighting like a man? Women are just men with an extra "wo" aren't they? I know all about woman you know, even though I admit there is a lot about them that I don't know. G'day Mate.