43 years ago I was just six years old but I was utterly enthralled by the Apollo missions. I remember being utterly disappointed in May 1969 when the Apollo 10 Lunar Module descended to within a few miles of the moon's earth surface. I could not understand why they did not go the whole hog and land the thing. Less than two months later just about the only thing on my mind was the prospect of Apollo 11 being the one where someone actually walked on the Moon's surface. 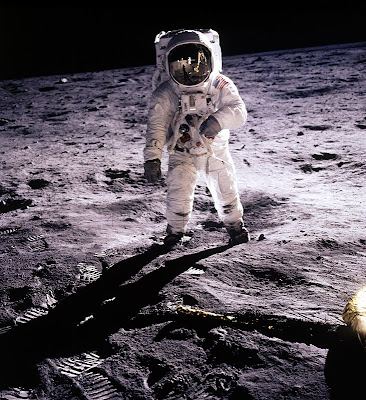 Although I did not see the landing live on TV I was utterly thrilled that Neil Armstrong and then Buzz Aldrin finally did it! Apollos 12 through 17 were also thrilling but throughout my childhood it was Neil Armstrong who was my absolute hero. Other notables like George Best were all well and good but they just could not measure up to Neil. 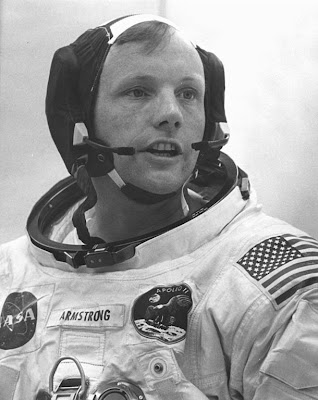 Buzz Aldrin came a moderately (but not too) distant second. As for Michael Collins I felt sorry that the poor guy remained stuck in orbit!

20 years later, I was working as an Immigration official at Heathrow Airport. Summer was as busy as hell but it was normal for the major ports to send "relief" streams to smaller ports to help them deal with a massive increase in traffic. That year I landed one of the plums, four weeks at Prestwick Airport,near Ayr, in Scotland. The work was easy and I got the chance to do a fair bit of sightseeing.. as well as plenty of drinking with the other relief staff!


One weekday morning just after we had cleared the American and Canadian charter flights (Scottish expatriates coming back to visit friends and family, Canadian and US tourists wishing to see the sights of Scotland or take in a spot of golf). Most of my colleagues had gone off on a late breakfast break so I was holding the fort when a private jet landed. It turned out to be a party of Americans and Britons coming to play golf.

One of the party was Neil Armstrong himself. While it was never the done thing to faun over celebrities, All I could say was WOW! NEIL ARMSTRONG! If I had heard of Wayne's World at the time I might have gotten down on the floor and done the "I'm not worthy" thing.

Not much of a story, I know but he was my childhood hero and for a short moment I was a six year old once again...Such is life
Posted by jams o donnell at 9:17 pm

Forty-three years ago I was just five years old, and I vividly remember watching the Apollo 11 landing on live TV, along with the other children in my primary school in North East Valley, Otago.

Along with you, I regard Neil Armstrong as one of my childhood heros. Perhaps the greatest of them all.

Did you see that BBC documentary by Andrew Smith, "Being Neil Armstrong"? A lot of people have sought to discover the 'real Neil Armstrong'; I think Smith succeeded in this endeavour.

As for Michael Collins, fret not, for while Collins did not set foot on the Moon, he led the Irish war of independendence against British imperialism. No mean feat, that.

Geirge Best, Bobby Moore? they are nobodies when compared to Neil and Buzz.

I don't think I saw the documentary. It must have ben hard to get to the kernel of the man given his privacy.

Amazing that Michael managed to bounce back from being killed 47 years before!

I think that is a great moment to treasure. As you have done all these years.

I think it is a lovely story, it makes me smile :-)

The story about the death of Michael Collins is nothing but a deValerist lie. As any fule no, after the liberation of Ireland Collins returned to study as a mature student, became a military test pilot along with his mate Neil Young, and the rest is history. And at some point Collins will return to save the nation from the shower ofd shits currently in charge.

As for the Armstrong documentary, they never met, the filmmaker and the astronaut, but there was an exchange of emails couched in impeccably formal and polite language, which revealed the very deep warmth and spiritual awareness in Armstrong's personality.

Ah so the story that he sleeps under the Hill of Tara are true!

Absolutely. Only a matter of time.

I love this post, Jams. Thanks for sharing the anecdote. He was a real hero. They all were. It was before my time, but as a young boy I felt excited just reading about what they'd done. And as an adult, I still do.

Thnks Stan. It really was as if a part of my childhood died on Saturday