Jacob Rees-Mogg: Man of the People!

First it was shadow Chancellor George Osborne and his alleged autism jibe at Gordon Brown; then it was Boris Johnson putting both feet and half a torso in his mouth over healthy food and booster seats; now it seems that prospective Tory candidate for North East Somerset (a marginal seat held by Labour) Jacob Rees Mogg thinks that anyone who didn’t receive a private education or did not go to Oxbridge is a "potted plant" To add insult to injuryhe also gave the impression that that anyone educated in the state sector is incapable of writing an "articulate" letter.

Mr Rees-Mogg was asked for his reaction to a survey by the BBC programme Newsnight which showed that 28 per cent of those on the “A-list” of people that Mr Cameron wants as future Tory MPs are from Oxford or Cambridge, and a majority - 52 per cent - were privately educated. The Eton and Oxford-educated son of the Tory peer said:

"Oxford and Cambridge are world-renowned universities that get the crème of British academic life. It would be absolutely perverse to be biased against some of the cleverest people in the country. The Tory party, when it's elected, has to be able to form a government and it's not going to be able to form a government if it has potted plants as candidates simply to make up quotas."

The Labour MP Dan Norris, who will fight him at the next election, said yesterday: "These comments show that even with one of the best educations in the world, some people still have a crass and ignorant outlook."

As someone who did not go to Eton or Oxford I will accept my status as a potted plant I would, however, like to be a Ferocactus. 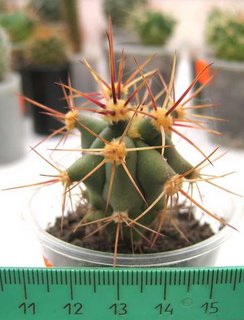 Ferocactus rectispinus
As you can see the specieis is small but extremely spiny. Others are more vicious and are "ribbed for your displeasure”. I shall digress before I make a suggestion that one be inserted up his arse.

You seem to have a fondness for potted plants.

Well if by Rees-Mogg's logic I am one then I can't be a self-hating potted plant now can I?

Shouldn't that "Jonathan" tag be "Jacob"? You see you just can't go around making mistakes like that if you are going to write articulate letters to the social services on behalf of constituents: they wouldn't know which constituent you were on about. :-)

In all seriousness, isn't this just a media attempt to find another "Tory politician makes gaffe" story? Nowhere is Rees-Mogg saying that all non-Oxbridge/public school people are potted plants. The way I read it, he's saying that he disagrees with the suggestion that posh Oxbridge graduates should be excluded and replaced with less qualified people purely on the grounds of diversity quotas.

Which is less controversial, although still open to debate.

Admittedly, in the current climate of gaffe-hunting, he should have had the good sense to avoid the crass and inflammatory language he has used to make this point.

Well I am of course a potted plant myself.. Thanks for spotting my error I have corrected it!

Okay even if it is all a bit overplayed, Rees Mogg deserved a bit of a kicking for his sheer arrogance

I quite agree that the way he chose to respond to the question did make him sound like the traditional arrogant posh Tory wanker. Not exactly helpful for the rebranding Cameron is trying to do...