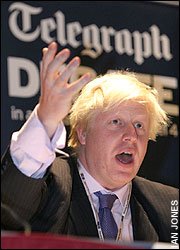 Despite tory heavyweight Boris Johnson’s stout defence of the Rotherham 'burger queen' mothers the idea that children should be allowed to eat junk food at school has almost no public support, according to a MORI poll
Only 11 per cent of the public back their stance, while 86 per cent believe pupils should not be allowed out at break times to buy fast food and sweets from nearby shops. The survey was conducted just after Johnson, the shadow higher education minister, caused controversy when he supported parents who were running a fast-food delivery service, which they passed through railings at Rotherham's Rawmarsh School, by saying: 'Why shouldn't they push pies through the railings? This pressure to bring in healthy food is too much.'

You have to worry sometimes, the last place I would put Boris Johnson is the department for Higher Education. I'm glad the public can see sense.

The school menu is something that can be controlled.

Minimally atleast not having soda pop machines and candy dispensers. Everything else is controlled at school, why not the menu?

True Nightowl. I think Johnson made an idiot of himself over the junk food issue. It is good that people don't think the way he does

Ren, school dinners were, perhaps surprisingly, an election issue last year. Thee has been a move to provide better food in schools. One in northern England banned junk food so some mothers rather stupidly supplied crap to their kids through the school railings. Johnson, who will be a Minister should the tories regain power ralied to their support. It would seem that people tink healthy eating is the better option. Perhaps the nessage is getting across and obesity levels will fall - The UK is not as fat as the US but rather fater than other european nations.

jams, you should hire eastern European cooks. The food would be stolen in no time, no food, no obesity. As simple.

LOL Red, We will get our chance next year as the EU border moves!