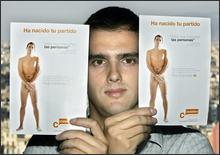 Albert Rivera's nude body is everywhere to be seen in Catalonia. just what he wants as he runs for president of Catalonia . The 26-year-old lawyer knows his campaign to lead this powerful Spanish region is a long shot but he hopes at least to get voters talking about something else besides their role within Spain and whether they should speak Catalan or Spanish.

Rivera acknowledges using nudity is "pure marketing" designed to buck tradition, grab headlines and lure young voters. "If major brands are so daring in their ad campaigns, why can't a political party be? We wanted to move away from traditional Catalan politics and show people that they can relate to us."

His platform features strong support for bilingual education in a region where it is virtually impossible for public school students to attend classes in Spanish.
The party also wants more low-cost housing for young people and discounts for students on all public transportation. But its main rallying cry is criticism of the overtly nationalist politics that have dominated Catalonia for decades.

Although Rivera doesn't pretend to be a serious contender for president, his party is hoping its mix of unconventional campaigning and a youth-friendly platform will help them win one seat in the 135-member Catalan parliament. The president is chosen by the party or parties that form the government . Capturing a seat requires at least three percent of the vote, about 100,000 ballots. Although the party has the backing of well-known cultural and intellectual figures in Catalonia, garnering so much support in so little time is not easy.

The campaign image has been distributed on flyers to tens of thousands of people, and 10,000 posters are plastered on buses, billboards and buildings in the Barcelona area. The campaign image has drawn little public disapproval, even from conservatives. "It's very well done!" Cristina Gollado, 70, said with a laugh she compared the photo on a flyer to the real Rivera standing next to her. "I'm old, so I was a little taken aback by the picture. But of course I'd vote for him, if only for his good looks."

Nude campaign posters? It is just as well we won’t have naked campaigning for the leadership election. I doubt anyone would welcome Brown or O’Donnell in the raw.Ho hum...

I wouldn't be at all surprised to see David Cameron jumping on the band-wagon and getting his kit off!

Gah, so not only can he talk bollocks he can show them too!

Given the general lack of physical fitness among American politicians, this is a pretty scary thought.

Believe me Bryan our lot aren't a pretty sight either!

I was saw a picture of John Prescott wearing a wet suit... ugggh!!!

Oh my god!that is a sight to revolt the eye! Puppies and chushions, puppies and cushions....

Here's a bigger picture of the poster (along with some German political stuff).