A meeting of veterans

The Observer carries a story today concerning a meeting between the oldest surviving British and German WWI veterans. Henry Allingham, 110, and Robert Meier, 109, met in Meier's home town of Witten, near Dortmund.

Allingham and Meier are the oldest men in the UK and Germany respectively. Allingham remembers watching WG Grace play cricket. Meier remembers meeting the Kaiser during the First World War. There had been a plan to make yesterday a three-way meeting with France's oldest veteran, but he was too frail to travel. For a time Meier had been written out of the history books. Last year the death of 108-year-old Charles Kuentz was widely reported as the passing of Germany's last First World War veteran. In fact the number of Germans had been underestimated: some sources suggest as many as eight are still alive. The number of known surviving British veterans stands at nine. 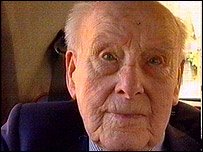 Allingham joined the Royal Naval Air Service in 1915, became a Mechanic First Class and flew eight missions as a gunner. He served aboard one of the first aircraft carriers and witnessed the Battle of Jutland, then in early 1917 was sent to the Western Front, where he serviced planes and had to retrieve those shot down at Ypres and the Somme. In 1918 he transferred to the newly formed RAF and is its sole surviving founder member. 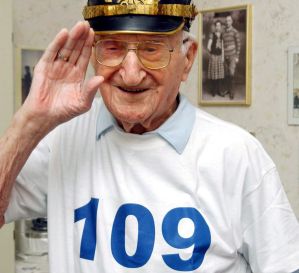 Meier, born in 1897 to German parents in Ukraine, was also in the trenches. He fought again in the Second World War and was taken prisoner by the Soviet Union, which held him for two years. 'The time in prison took it out of me,' he recalled, adding that without that hardship he would be even more mobile today.

Apparently there are still 51 WWI veterans alive, although a proportion will not have actually seen active service while at the beginning of the year there were about 90. That so many are still alive is probably unsurprisjng given the millions who fought in the conflict. One thing is certain the veterans will be gone in a few years and then the conflict will pass from living history.

It is fascinating to me that these men faced death at such a tender young age and are still around today. It reminds me of a couple of news film clips of the 1960's. They featured the last living woman born a slave on a southern plantation and also an American Civil War veteran still marching in a Veteran's day parade wearing his tattered Confederate uniform.

It is amazing how long "living history" continues. The American Civil war remained living histroy until the 1950s.
WWII will be for at least another 35 years.