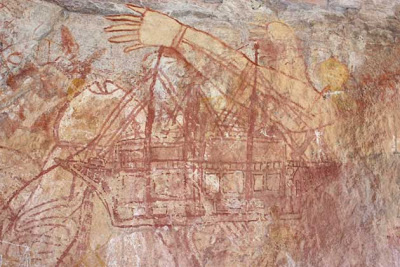 The Independent on Sunday had this fascinating item about the discovery of a collection of aboriginal rock art in Arnhem Land. The art records life in the area for the past 15,000 years, up until 50 years ago.

Alongside ancient paintings of thylacines are images documenting modern-day inventions – a car, a bicycle wheel, a biplane and a rifle – as well as portraits of a missionary and a sea captain. It also appears to rewrite Australian histhttp://www.blogger.com/img/gl.photo.gifory, undermining the widely held assumption that the continent was isolated and largely unvisited until the First Fleet arrived in 1788. The paintings suggest that the people of northern Australia have been interacting with seafaring visitors from Asia and Europe for hundreds, possibly thousands, of years.

A team of scientists on a recent expedition to the Wellington Range recorded 81 images of ships, ranging from the vessels of Macassan traders from Sulawesi (now part of Indonesia) to dugout canoes, 19th-century British tall ships, 20th-century steamers and Japanese pearling luggers. They even found paintings of a luxury cruise ship and a Second World War destroyer. Twentieth-century rock art is extremely rare anywhere, and the scientists surveying the paintings with the help of a local Aboriginal elder, Ronald Lamilami, say they represent possibly the longest continuous record in the world.

The rock art has been known about since the 1970s, when a leading expert, George Chaloupka, was taken to the area by local people. But he saw only a tiny proportion of it, and records of its whereabouts were lost. It was only recently that they were rediscovered by a doctoral student, Daryl Guse, working with Mr Lamilami. Professor Tacon's team, which travelled to Arnhem Land last month, was overwhelmed by the sheer volume of the art, much of which had never before been viewed by white people. In one rock shelter alone, they found 1,500 paintings, comprising "more 'contact era' art and more varied imagery than any other site in the world", according to Professor Tacon.

"This area is astounding," he said. "Every time we went out, we had a plan to survey a particular stretch of the range, but we could hardly move at all, because we were continually finding sites. Over a few days, we found 100 previously undocumented sites, and we've only just scratched the surface. There are hundreds, possibly thousands, of sites waiting to be revealed to the outside world. This area is of World Heritage significance, and it rivals the best of any area in Australia. It's right up there with the best rock art regions of Europe and South Africa and elsewhere."

The art contains subjects and styles not found elsewhere in Australia. Much of it consists of multiple layers applied over the millennia. On one wall, for instance, is a biplane painted over a kangaroo. One early depiction of a ship includes a wealth of interior detail, suggesting that Aboriginal people had been boarding vessels for generations. So, when the British arrived, Professor Tacon speculates, "it was not something bizarre and unusual; it was just the latest group in their latest newfangled ships".

his is utterly fascinating stuff. I will have to find out more about this. It’s definitely a “wow” thing
Posted by jams o donnell at 10:23 pm

I may say: Thanks for your reseach and this very interesting information.
Fascinating

Your right, that is fascinating stuff. Really interesting how people without a written language keep track of history.

Australian aboriginal culture is amazing and very rich. I'm thinking about their verbal songlines as a way of recording history. The pic you posted is lovely - they really worked with the natural colours to very pleaseing effect, didn't they?

It is a wow thing indeed. From a historical point of view.

I am not so enamoured of the modern aboriginal painting style, acrylic dot painting, based on traditional designs. I am sure there are very good examples but I possess a very uninteresting brown one which I call the ugly painting, a gift from a relative actually.

What a find! This is just glorious!

Thanks everyone. This sort of discovery still allows me to stare in wonder at this world rather than shake my head in dismay

Wonderful! I hope we hear more of this. Thanks so much for bringing it to my attention.

I'll sit here waiting for Midnight Oil to get back together and write a song about it!

I wonder but Pete Garrett is a politician nowadays. Perhaps they will be back one day