After meeting Bob from Brockley I resolved to finish off at long last the tale of the larger than life character Red Cushing by dealing with his time as a prospective German spy. It didn't last and he ended up in Sachsenhausen where he was a witness to the last days of the life of Yakov Stalin. Alas and Alack, I cannot put my hands on the books I need, Hiho....

That said it's interesting what you can come across on the internet. Starting off with Archibald Maule Ramsay, a ferocious anti semite who held the dubious distinction of being the only MP to be interned during WWII, proceeding through a number of Holocaust revisionist scumbags I end up at the piece of human shit that goes by the name of Ernst Zundel. I was not aware that he started his odious "literary"career peddling crap about Nazi saucers and Antarctic bases.

It's amazing how the German Neuschwabenland expedition just before the war, an American exercise (Operation High Jump) just after the war, a tiny British military expedition to Antarctica during in 1943 and the tardy surrender of a few U boats can form the bedrock of such nonsense as the existence of Nazi bases on that (almost but not completely) icy continent.

However, let me digress onto something truly fascinating and move from the South Pole and Holocaust denying vermin to the North and there was a real little war fought on the ice and on the icy seas. I didn't know until today that the vessel you see below was the first American warship (of sorts) to capture a (soon to be) enemy vessel in WWII 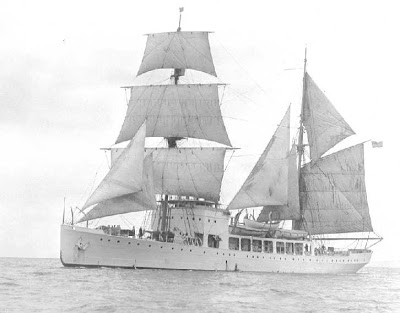 The Northland was a coastguard cutter, launched in 1927 designed specifically for arctic operation. In 1941 the US took over Greenland. The same month the Northland set out on a two month cruise to assist in the South Greenland Survey Expedition. It was then transferred to the newly formed Northeast Greenland Patrol.

On 12 September the Northland sighted the Norwegian sealer Buskoe 12 September and sent a boarding party to investigate. Buskoe, which was suspected of sending weather reports and information on Allied shipping to the Germans, was taken to MacKenzie Bay in Greenland, becoming the first American naval capture of WWII(although of course before it formally entered the war).

The Buskoe's capture led to the discovery of a German radio station further up Greenland coast from Mackenzie Bay. The Northland sent a raiding party captured three Germans, with equipment and code, as well as plans for other radio stations in the far north. The Germans were treated as illegal immigrants....

Although built for colder conditions, the Northland ended its life in much further waters. After being sold for scrap in 1947 the Northland was renamed Medinat-HaYehudim and was used to transport Jewish refugees to Palestine (but that is a different subject and one that does not reflect on Britain with any credit at all). In 1948 she was renamed Eilat and along with two former Royal Canadian Navy corvettes and a passenger ship formed the nucleus of the infant Israeli Navy under its first commander, Paul Shulman.

I know I dwelt a little on some utter scumbags at the start but it is tuly amazing what you can come across starting in one place on the internet and seeing where takes you... In this case the destination was fascinating evn if the journey featured some real pieces of slime at the start...
Posted by jams o donnell at 4:00 pm

Zündel's nomen est Omen.
The German verb 'zündeln' in English means as much 'playing with the fire', setting fire.
Good news: The generation Zündel-Faurisson-Irving-Leuchter & Co. is to soon taking their dwelling six feet under.
Bad news: the next generation of Intellectual incendiaries has been indoctrinated ...

1. My reading of the above confirms my assessment of some members of the younger generation's failure of moral and intellectual nerve.
2. The fear of fear is masked by a poor substitute - hubris.
3. Critical thinking is out and believing is in - and defaming those with whom you disagree with is routine, but never to look at the opinion/argument expressed.
4. What is Revisionism but an heuristic method to seek out the truth of a matter. Any person who dares independently to think through an issue is a revisionist because as new information comes to hand, one's worldview-Weltanschauung develops a new perspective.
5. This clarifies why we must have a free flow of information - and those that defame their oponents through name-calling merely reveal their fear/ignorance of this process.
6. This is the case with you. Why not take up Professor Robert Faurisson's challenge: Show me or draw me the murder weapon-homicidal gas chamber of Auschwitz? Do it and you will become world famous because to date this has not been done!
7. So, continue to smirk and snear at those who speculate, those who dare to think outside that proverbial box.
8. Or become critical in your thinking processes. A good starter is the 2003 Weapons of Mass Destruction lie that offered the pretext of the Iraq invasion. Or, think of the 2001 9.11 tragedy and note it setting the new global dialectic: USA and free & democratic West versus the Muslim world/ Islamic religion, the latter being the breeding ground for terrorists who wish to hurt the western democracies because they hate our freedoms!
9. Then slowly move back in time to discover more historical lies that your teachers taught you at school - until your thinking process reaches dizzying heights where the pulsations opf the universe bring you in contact with Creation itself, where you find a home within your own mind, and where scapegoating is not necessary anymore because you fear no-one and you are on that timneless journey of understanding the mysterioes of life itself.
Cheers
Fredrick Toben
Toben@toben.biz

To attack a man for talking nonsense is like finding your mortal enemy drowning in a swamp and jumping in after him with a knife.
[Karl Popper]

I didn't realise that about Zundel. I thought it stood for something like gimlet-eyed nutcase... Sadly their discipls will come through

THat certainly is a favourite quote Sean!

It's amazing, indeed, how often it does fit, Jams.

Very educational. My first encounter with a Holocaust denier in the wild. But the first American ship to capture another? In WW2 I suppose you mean?

Yiou are quite right. I have amended ti text to WWII. Otherwise I would ignore the feats of US navy of the war of 1812