Imagery of the Iran-Iraq War 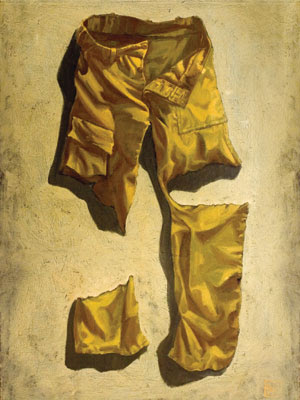 careless of the Guards.

For eyes she has

fallen off the bunch.

lost to the world.

A straw in the wind,

she's deadened to the world.

Round her neck she has

a pair of teardrops, a curse:

of a dead soldier boots

with laces tied together.

"sitting on my shoulders

with his boots on."

I have posted the painting and the poem before but never together. THe painting is by Minoo Emami. It is inspired by her husband's experience in the war. He was seriously injured fighting the Iraqis. One of his legs was amputated.

The poem is The Necklace by Simin Behbahani, the Lioness of Iran. The last time I posted the poem in 2008 one of the comments made was "Jesus, that was DARK!!". I agree, In my mind it is as powerful as any of the works of Wilfred Owen.

I wanted to see how these two powerful indictments of war went together. I think they work together, others may not of course!
Posted by jams o donnell at 2:03 pm

Good idea, Jams. And: it works. Impressive. Thank you.

They work very well together.

Oh yes, they do work well together.

Extremely moving Jams. What a juxtaposition

Thanks. I'm glad you find them as poignant as I did