A wood henge at Stonehenge 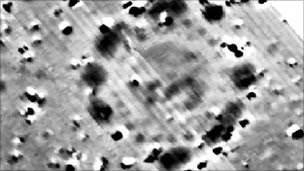 Breakfast news today carried a report about an archaeological discovery at Stonehenge: a second henge which has been described as the most exciting find at the site in 50 years.

The BBC reports that the newly discovered henge is situated about over half a mile from the giant stones. It consists of a circular ditch surrounding a smaller circle of deep pits about a metre (3ft) wide has been unearthed at the world-famous site in Wiltshire

It has two entrances on the north-east and south-west sides and inside the circle is a burial mound on top which appeared much later.

Project leader Professor Vince Gaffney, from the University of Birmingham, said the discovery was "exceptional You seem to have a large-ditched feature, but it seems to be made of individual scoops rather than just a straight trench," he said. "When we looked a bit more closely, we then realised there was a ring of pits about a metre wide going all the way around the edge.

Data from the site is being collected as part of a virtual excavation to see what the area looked like when Stonehenge was built. This project is being funded by the Ludwig Boltzmann Institute for Archaeological Prospection and Virtual Archaeology, in Vienna, and the University of Birmingham, and is assisted by the National Trust and English Heritage.

Professor Gaffney said he was "certain" they would make further discoveries as 90% of the landscape around the giant stones was "terra incognita" - an unexplored region. "The presumption was this was just an empty field - now you've got a major ceremonial monument looking at Stonehenge," he said.

Fascinating stuff. There is the site of another "Woodhenge" a few miles from Stonehenge but this is a great discovery
Posted by jams o donnell at 8:38 pm

Email ThisBlogThis!Share to TwitterShare to FacebookShare to Pinterest
Labels: stonehenge

I spotted that one earlier, very interesting indeed :-)

Echoing CherryPie.
Also interesting I do find to find Ludwig Boltzmann mentioned twice today - here and over at Andrew's.

There you go Sean - once by a scientist and once by a drivel merchant!

And one of your commenters can't count until three, otherwise after typing the very name it was to be found even thrice today.

Umm, time to put my head on the pillow, I suppose.
The peace of the night!

Ahem: please take the 'otherwise' for not existing, and the comma for a colon. :)

I was very much wondering about the recurring Boltzmann references myself...

I think we all need to be extra vigilant tonight!!

I'm totally lost in the Boltzmann mystery. It's probably none of my business anyhow.

Sean the Boltzmann references seem to mount up. I suspect a conspiracy

Cherie, Claude, Boltzmann is at the heart of a dark conspiracy featuring the Greys and the Pigens. Banish it from your mind!

And after that last comment, I am totally at a loss what Boltzmann is all about! But I do like the idea of more mystery attached to the Stonehenge region! An intriguing place with many secrets!

It certainly is Gemma. Yet I prefer Avebury, Now that for me is the real site of mystery!

See, Mr. O'Donnell?! Nothing seems able to stop him: now the obscure Mr. B. has occupied Greyscale Territory.
Do we have to fear that he will make it to the essential inherent interior essence which is hidden in the root of the kernel of everything?

Re Avebury: I'd be with you were there not Newgrange.

Haha Sean, Boltzmann will beble to say All your base are belong to us!

Boltzmann... Ah, I don't have the time or the energy (hee, hee) but the much more beautiful resonance is that right alongside your words "Professor Gaffney said he was "certain" they would make further discoveries as 90% of the landscape around the giant stones" your sidebar carries the words "Quark, strangeness and charm." Now look these terms up in the context of particle theory and have a wee ponder about what's going on...

Hmm perhaps there is some entity guiding our thoughts and writing. I wonder what Boltzmann has to say about this.. I don't buy that he died in 1906...

Well, Jams, I think you should not have left Andrew standing in the dark. Here's the proof in the comment section.

Ah I see Sean! But Boltzmann has a lot to answer for!