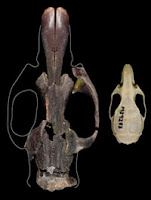 The Gambian pouched rats used to detect mines and sniff out TB samples are big fellows, a lot bigger than Rattus rattus or norvegicus. But they are small compared to ancestral rats discovered by archaeologists in East Timor

Science Daily reports that the bones are from what was the biggest rat that has ever lived. When alive it would have weighed 6 kilos. The excavations also yielded 11 species of rodents new to science. Eight of them weighed a kilogram or more.

Carbon dating shows that the biggest rat that ever lived survived until around 1000 to 2000 years ago, along with most of the other Timorese rodents found during the excavation. Only one of the smaller species found is known to survive on Timor today.

Each of the islands of eastern Indonesia evolved it own unique collection of rats.
Dr Aplin of CSIRO who headed the search has also found six new rat species in a cave on the island of Flores. Some of these might still be living on Flores having evaded detection by modern collectors.

Currently the biggest rats weigh around 2 kg and live in rainforests in the Philippines and New Guinea.
At six kilos the rat would weigh not a lot less than Boris or Robyn. I couldn’t even imagine Bebe having a go at one of them!

Email ThisBlogThis!Share to TwitterShare to FacebookShare to Pinterest
Labels: Rats

Thanks Calvert's just on holiday. Svejk is filling in this week

I wouldn't want to meet one of those on a dark night!

Bah you should see the rats in the DMV. They walk on two legs and drink decaf.

They better be mega tarantulas Stan!

Was this specimen found near #10 perchance?

A rat;s too good to be a Tory Susan!