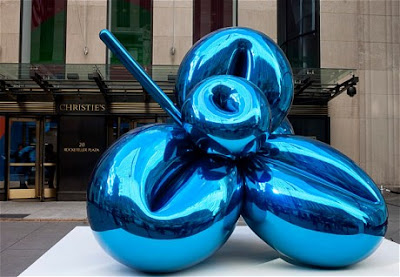 Art according to Jeff Koons
There is art I love, art that leaves me cold and art I downright hate. The work of Jeff Koons falls into category three. Koons is called a master of kitsch in my view he is a peddler of shit.

Koons has stolen inspiration from other artists and has been taken to court. An example is the case of Rogers_v._Koons where photographer Art Rogers sued the “artist” over his creation of a sculpture that was a remake of his photo a string of puppies. Koons lost, was forced to had over the last of the series of sculptures and make a substantial financial settlement. 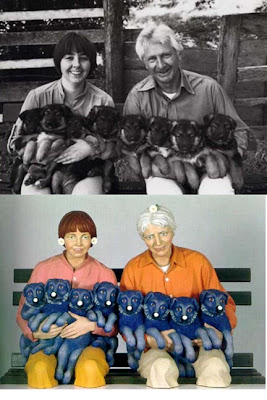 Now it seems that Loons has the gall to take legal action against a company for copyright violation.

Lawyers representing Koons have filed cease-and-desist letters against the firm and the San Fransisco gallery Park Life which sells the bookends.

The owners of the San Francisco gallery, Park Life, have responded, claiming that it is impossible for anyone to copyright the canine shape. "As virtually any clown can attest, no one owns the idea of making a balloon dog, and the shape created by twisting a balloon into a dog-like form is part of the public domain," Park Life's counter-lawsuit said.

It is clear that Jeff Koons in an arsehole and his lawsuit is utterly frivolous. I hope that it is laughed out of court. That said the critics who faun over his crap and the people who buy it are bigger arseholes by far,
Posted by jams o donnell at 4:19 pm

Ah but you're forgetting something: that is SHINY and it is BLUE. Ie it is SUPERIOR!!

By the rules of ME ha ha hee hee.

I'm only kidding. I have a rational post I'm putting up after about 9pm but it's got to wait in the can till after then when I get back from NA

Seriously I hope that NA is helping you

I suppose it's all a part of the artist's game? You have to admit, though, Jams, that the original photograph of the couple with the puppies, could look fairly kitsch to a guy like Koons!

He is not my favorite, though I am amused by his sculptures, as well as his art world antics.

I think he's got a nerve to sue anyone given his track record. Can't say I care for his work

I agree with you about this subject.

He's really been an arse on this one eh?

Sounds like a major asshole indeed. Of a size that could soon become a black hole and suck the universe in.