The Battle for Craggy Island 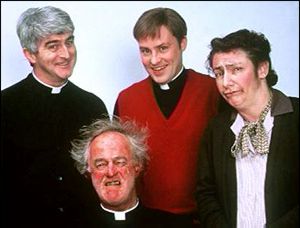 Two Aran islands, Inis Mor and Inis Oirr, are at loggerheads over who has the best claim to compare themselves to Craggy Island; a desolate spot that of course was the setting for Father Ted, perhaps the second funniest ever sitcom (the funniest of course being Blackadder).

Inis Mor, the largest of the Aran Islands, is hosting a three-day Friends of Ted festival next month featuring a five-a-side kickabout between teams dressed as priests and nuns and a Father Jack cocktail evening. The residents of Inis Oirr, the smallest of the islands, are not amused. They believe they have a better claim to be Craggy Island because the opening title sequence, including shots of the wrecked cargo ship the Plassey, was filmed there.

The festival will also feature events including Hide a Nun and Seek, a Lovely Girls contest, and Buckaroo Speed Dating - in honour of Father Dougal's favourite game. A farewell party kicking off at 10pm on the last evening includes a Father Jack hunt. Because of the size of the island, the event is limited to 100 fans.

Father Ted was shot at various locations in County Clare including Ennis, Kilfenora, Ennistymon, and Kilnaboy. The parochial house is at Glenquin, near Kilnaboy. All interior scenes were shot in London. Written by Arthur Mathews and Graham Linehan, Father Ted starring Dermot Morgan ran for three seasons on Channel 4 between April 1995 and May 1998, and quickly become a success. The comedy's catchphrases were heard in every office and student common room, from the alcoholic Father Jack's war cry, "drink, feck, girls, (arse)" to housekeeper Mrs Doyle's maddening entreaty to "go on, go on, go on, go on" and have another cup of tea.

Morgan died aged 45 on February 28 1998 after he suffered a massive heart attack at his home just 24 hours after he finished recording the last episode of Father Ted. The festival marks the anniversary of his death.

Blue Monday becomes a little less blue.. I daresay it will darken again by the time I get to work!

Father Ted
Posted by jams o donnell at 7:48 am

LOL Piseces you are insistent but Craggy island is definitely in Ireland.. you can have Rugged Island and Father Dick Byrne though!

blackadder is one of my all time favourites...especially the christmas special...'grandpa's toenails'....cunning stunts all round!

Ah that was a classic! I loved so many of the episodes but the one where he has a drinking contest at the same time as discussing his inheritance with the Whiteadders.. Now that was a hoot!

Now I know where the priest avatar of one of your commenters came from. Mystery solved! Over at the baby name snob message board, a lot of members are European and swear that Blackadder is one of the funniest shows they've ever seen. I might have to look for that on DVD.

Pisces, you'll get used to it. besides, it is more emphatic this way.

No worries Pisces. I thought that is what happened.

Red you're right, it dad give the comment far more emphasis!

Blackadder is extraordinarily funny and well worth checking out. Start with Blackadder II and come back to teh Black Adder last. Avoid Blackadder, back and forth though.

Higgledy-piggledy,
Pisces Iscariot,
Craggy New Zealander,
Blogger of note;
Putting up posts that are,
Coincidentally,
Same, word-for-word, as the
Ones he just wrote!

(OK, so I am neither John Hollander nor Anthony Hecht... but I can double a dactyl.)