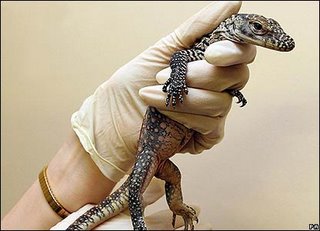 Just before Christmas there I put up a post about Komodo dragons at London and Chester zoos being about to reproduce by parthenogenesis. The BBC reports today that five of the ten eggs laid by Flora, the Chester Zoodragon, have now hatched.

The five male hatchlings (All Komodo dragons bred in this way will be male) are up to 18 inches (46cm) long and weigh about 4ozs (113g). Two eggs are still in incubation and three others collapsed. .The hatchlings will be moved to an enclosure on public display at the zoo around Easter and will ultimately grow to three metres in length - the Komodo dragon is the world's largest lizard.
.
The new clutch are the first Komodo dragons to born at Chester Zoo, where Flora and sister Nessie are part of a European zoo breeding programme to protect the threatened species. There are fewer than 4,000 Komodo dragons left in the world, and those living in the wild live on three islands in Indonesia.

Cool! Houston Zoo has a couple of Komodo Dragons, and I don't believe I've ever seen a stranger creature. There's a breeding program here as well; Houston and San Antonio (which has arguably the best zoo in Texas) have temporarily swapped a couple of dragons in hopes of more dragons.

I am glad to see kmodos on tv or from behind a sturdt barrier! They are amazing creatures, just not oe I would wish to meet in a dark alley... or a well lit one either!

so cute when they are little...

and only when they are little, Mullet!

I agree with mullet. This proves conclusively that all babies are adorable, even if they grow up to be lethal and dangerous. I bet even the most horrifying serial killer was squishably cute as a baby.

We have a family of chameleons living in the wreath on our front door and in the molding around the entrance to our house. I love opening the door and watching them scurry everywhere. They had babies not too long ago also. Baby lizards I can handle. Baby lizard/human hybrids like in the mini series V is quite different.

I am sure he or she was. It is amazing how tiny the kmodos are and how big they will be but that's life!

I would be happy to have Chameleons. I am jealous. I wonder if we will have a bees nest again? I was happy for the Honey bees to have a small nest in the garden