Robyn at the Islington Academy 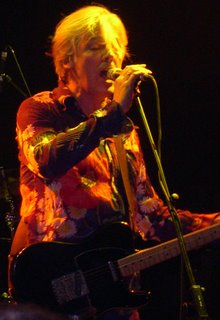 My fellow Robyn fan Tulloch’s review of Robyn’s Oxford concert indicated that he was on top form. Robyn seems to be on a roll because he played a stormer of a concert last night at the Islington Academy.

There was no Michael Stipe (excellent), no REM songs played, and unlike Tulloch I didn’t end up next to Thom Yorke (A major result although I did end up next to Bob Geldof at a Soft Boys some years ago). The set included in no particular order

Adventure Rocket Ship, Sally Was A Legend, Ole Tarantula, City of Shame, If You Were A Priest, NY Doll, Somewhere Apart, Arms of Love, the Underneath, Museum of Sex, Television, Authority Box, Creeped Out, Driving Aloud (Radio Storm). Jewels For Sophia, and finally A Man’s Gotta Know His Limitations Briggs. 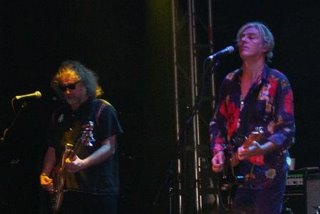 Robyn and Scott McCaughey
At about 2 hours we certainly got value for money for our £16.50. For me the stand out was Television (even the bing a bong a bing bong at the start sounded great*) while the only song that sounded a little off to me was If You Were a Priest. Robyn concerts are not just about the music: he usually intersperses eccentric and sometimes convoluted monologues between the songs. I am glad to report that the monologues were longer and even more eccentric than usual! 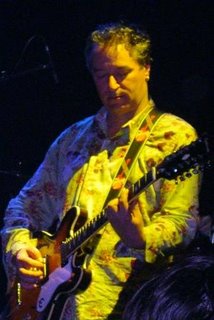 Peter Buck
Oh yes the Peter Buck, Scott McCaughey and Bill Rieflin performed their backing band roles perfectly well. I wish Peter Buck had a tenth of Robyn’s talent. I also wish Robyn had a tenth of Peter Buck’s wealth! Robyn announced that he will be playing Sgt Pepper in June so it looks like another a Medecins sans Frontieres benefit at the Three Kings in Clerkenwell in early summer.

As you see I did take my camera but I was a bit too far from the stage to get any decent photos. Unfortunately. Ah well better luck at the Three Kings in June!

Robyn Hitchcock
Posted by jams o donnell at 10:54 am

Where to start? Okay, Robyn didn't play any of your favorites? No Madonna Of The Wasps? No Airscape? Were you disappointed?

Since when has REM wrapped themselves up in all things Robyn? That was something that I didn't know.

Being an onomastical name nerd, I might have given the smackdown to Bob Geldof if seated next to him. Naming his children Peaches, Fifi Trixiebelle, and such. Shame on him.

I don't care for Thom Yorke even though the XM Satellite Radio station UPOP plays him all the time. I find his music bland and monotonous. Also, I wish England would keep Will Young and Ronan Keating locked up somewhere so we don't have to listen to their "music" anymore on the radio in the States. Do they know how to do anything but record lame remakes?

Not disappointed by the lack of Airscape or Madonna of the Wasps.. it would have been good but he has loads of great songs. As for REM they were big fans of the Soft Boys when they were a nobody bahnd in Athens. They covered Arms of Love as a "B side" of Man in the Moon and totally bollocksed it up. Robyn Buck and Billy Bragg used to have an ad hoc side band called Bingo hand job in the early 90s and Buck has played on quite a few Robyn albums. So the link is pretty strong.

Agreed on Geldof but I think his dead ex wife Paula Yates had a big say in the idiotic names.. The one she had with Michael Hutchence was Heavenly Hirani (gag!)

Gareth Gates and Will Young should pursue careers in somewhere far away like North Korea!

Well, at least Geldof was man enough to take in and raise his wifes illegitimate child by the man that broke up his marriage. Not many would do that. Immediately upon Paula's death a few years ago, he should have taken the girls down to the Hall Of Records for some name change certificates. Maybe, Helena, Louisa, Caroline, and Natalia would fit them nicely?

That was indeed an act to be praised. I was impressed when I head he tool in Heavenly Hirani.. Hmm given that Geldof is Irish, how about Orlagh, Niamh, Dierdre and Fionnula?

Siobhan is a guilty pleasure name for me! I'll only admit it here away from the prying eyes of my baby name snob board........I also like the name Willow!

Siobhan is fine as far as I am concerned.. Irish given names go well with Irish surnames.. Willow? Hmmm I will have to tell ewbl!

Yes. Siobhan with our Spanish surname might be cause for some confusion, and constant explanations. Maybe I'll save my beloved name Willow for a houseplant.

I was at this gig, and Madonna Of The Wasps was played, towards the end of the main set.

Thanks for pointing it out. I ded remembered it was played but I just hadn't gotten around to revising the text. Will do so now!